Posted by adamrobertyoung on 25/07/2012 in Behind the scenes, Photojournalism, Topical story | 1 Comment

You may have read my post on Xiancun village last week. This week, the story of an urban village in a more advanced stage of demolition and a sign of what lies ahead for Xiancun: Yangji Village.

This is what Yangji village used to look like:

(photo pulled from the China Smack website – click on the photo to check out the story from a different angle. Some of the comments at the bottom of the article reflect the different opinions on the issue)

I didn’t visit Yangji village until almost all of the village had already been demolished. I got a tip from a friend that something was going down in the village so I rose bright and early the next morning to check it out (well, at 5am, I wasn’t particularly bright, but it certainly WAS early). I arrived at the village to find that there were guards at every entrance already. I continued around the perimeter of the area on my bike until I came to the last possible way in – the final gate. To my surprise, it was unguarded! I seized my opportunity to enter, with the hope of snapping a few images of the scene before being kicked out by police.

Sure enough, after about a minute inside, a man entered the gate and started to walking toward me, calling out to me in Cantonese. I pretended not to hear, and after all, I can’t understand Cantonese. I kept shooting. As he approached me, he started pointing to various buildings, still speaking in Cantonese, as if he were telling me to take more pictures of those things. I asked him if he could talk in Mandarin, and then I quickly learnt he was one of the local residents who had stayed to fight the demolition of their homes. He told me the city police would arrive soon and he would hide me in one of the buildings from them. And that’s how it all began. 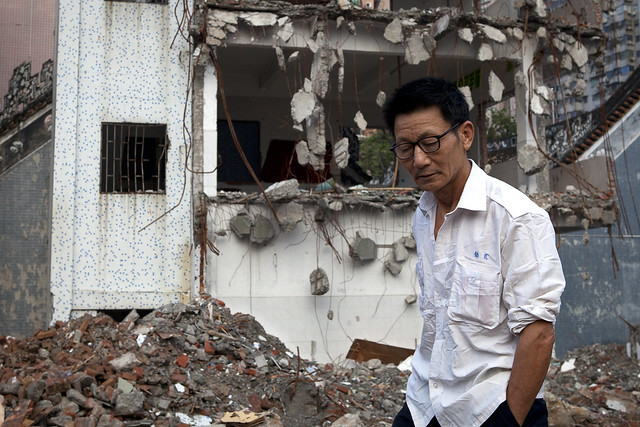 A resident of Yangji community stands by one of the few remaining buildings, already stripped of anything of value and left as an empty shell, half demolished.

It turned out another resident was to be forcefully evicted on that day. The first thing my new friend Mr Yao said to me in Mandarin was “Today, it’s possible somebody will die”. The homeowner to be evicted, Yao Runzhen, and his wife awaited the arrival of police and members of the district court. Yao was standing atop his residence, and his wife waited downstairs. They had hung protest banners around the home with phrases comparing themselves to mice in a snake’s nest, and declaring the corruption of the local government. 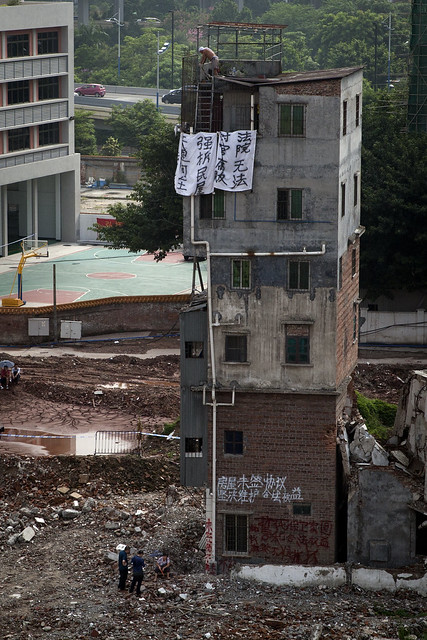 Yao Runzhen atop his home, his wife just visible negotiating with representatives of the district court at the foot of the home.

I met some of the other residents who had come out to support their friend before being ushered to the rooftop of another residence opposite Yao Ruizhen’s. 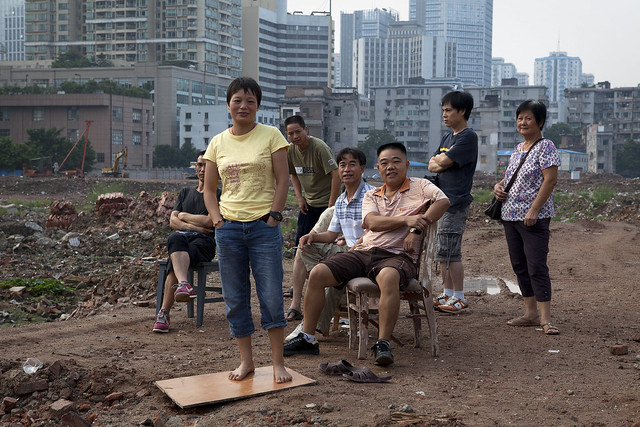 Some of the locals who came out to support Yao as he resisted eviction. That’s Yao’s wife to the far right.

I sat up on the rooftop, cursing the thief who had stolen my camera along with my 70-300mm zoom lens on it the month before. I only had the cash to buy a new camera body and use my existing 17-35mm lens, so I was really not set for capturing anything as far away as what went down that day. The lesson: be prepared, and be wealthy so you can afford to always be prepared! Still working on how to actually achieve the wealthy thing. Anyway, I digress…

Police and the riot squad roll in…

And flare they did. Before long, a couple of locals were carried off by police and representatives of the district court. 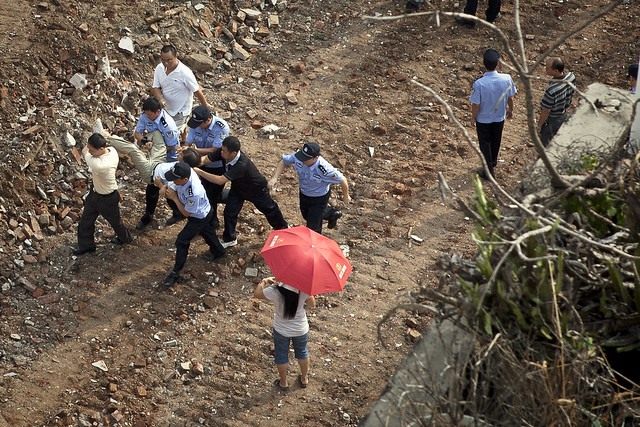 One of the locals carried off… 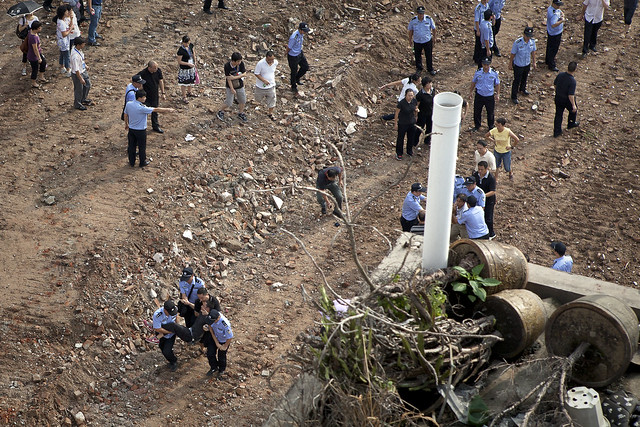 Residents that were taken by were held in police custody for around five hours and released with no charge.

After about four hours of negotiation at the foot of Yao’s home, an agreement was made, and Yao and his wife packed up their belongings in a removalist truck. It was at this stage that the media were allowed into the area, so a quick Google will bring up images of Mr Yao and his wife leaving their home. Local residents later told me they ended up taking a cash payment instead of a replacement apartment in the new development planned on the site. Yao said it was too painful for him and he just wanted to get out of there and never deal with the local officals anymore, saying they were too corrupt. The terms of the payment were 25,000RMB per square metre (the going rate for apartments in that suburb is 30,000-40,000 per square metre), however they only paid for 2.5 floors as only the bottom two had been built with local council approval. When they start planning to develop areas, approval for home extensions is hard to get, or it can be issued with flaws that lead to technicalities that allow the council to deny the permit’s validity when it comes to compensation when the homes are signed over to the government (more on one such case in a later post).

In all, it was about four or five hours from when I arrived to when Yao finally conceded and left his home. I was stuck up on the rooftop opposite for most of that time. I could not come down or police spotting me may have led to me losing my camera or at least the memory card with images from the morning, and perhaps having my residence permit and visa revoked. I wasn’t the only one recording events, however. In the same building on the floor below me, locals were filming everything that transpired, just in case things got out of hand. It would have been online in no time. Actually they did post photos and details of the event on Weibo, the local version of Twitter, but they were gone by early afternoon. Weibo is ruthlessly censored. 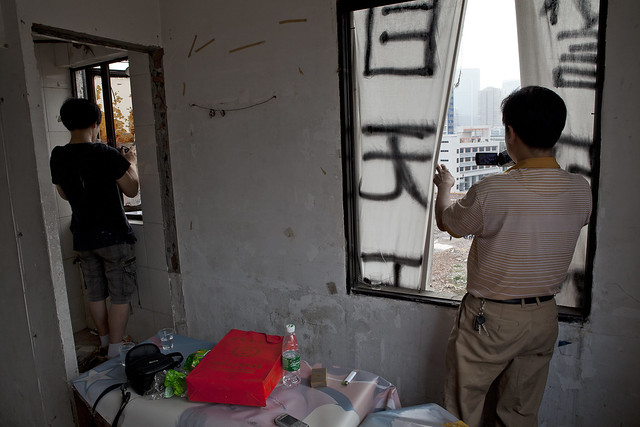 Homeowners and friends of the evictee filmed to ensure government accountability if anything tragic happened.

After the removalist truck left, the locals invited me to lunch in a nearby restaurant, and I got to know some of the others who had stayed to fight on. I’ll share some of their stories a little later on, so stay tuned… 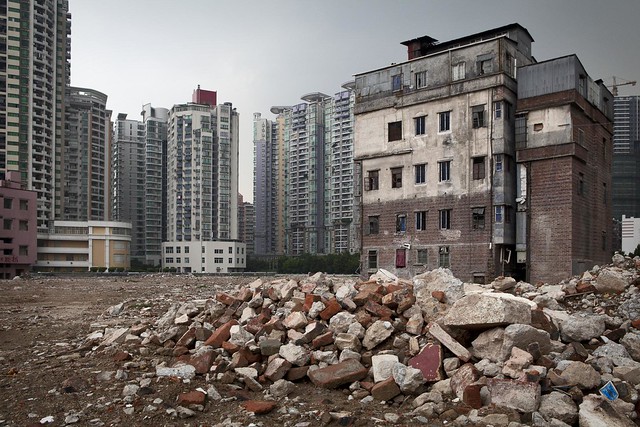 One of the few buildings left standing in Yangji village, with highrise apartments looming in the background indicating what lies ahead for Yangji.