Posted by adamrobertyoung on 06/09/2012 in Advice, Behind the scenes, Photographers | 3 Comments

“If only I had better gear, I could take some amazing photos!”

“I didn’t bring my camera, how can I take photos? Mobile phone cameras don’t allow me the control I need to produce anything of any quality”

Well, I can understand where people who say these things are coming from. There’s no denying that better lenses, higher ISO performance etc can certainly open up your options and enhance your ability to produce great images. But sometimes I think we get so caught up in that, and in the perceived limitations of not having such equipment that we forget what I consider to be two central factors in taking great photos…

Armed with these two weapons, you can obliterate any obstacles to taking great images. An exemplary model of this is an Australian photographer called Misho Baranovic, who produces amazing street photography using his iPhone camera (check out his website). If you have an eye that can see the beauty before you, there is no need for an expensive arsenal of photographic equipment to produce some stunning works!

Creativity is not just about seeing things before you in a different way, it’s also about being flexible and embracing the limitations of the tools you have to use, turning them into something that enhances your images, or even opens doors to new ways of sharing what you see.

Last time I was out at night time with friends, I was armed only with my mobile phone. I wanted to capture a slice of the evening to remember the time, but I was having trouble, as without a tripod, I could not capture clear images of the colourful riverside cityscape. I could have done one of two things…

1. Resolve myself to the fact that I did not have the equipment to capture the type of images I wanted to achieve and give up, returning home with nothing to remember the great night I’d had by.

2. Forget about what I wanted to achieve – my preconceived ideas and “safe” zone of proven approaches – and think instead about how I could use what I had at my disposal to create something unique that still captured the mood of the evening.

I chose the latter. If the images were gonna be blurred, then I would embrace that blur and make it work for me. So I started shooting, intentionally moving the camera so the lights produced streams and patterns in the resulting photos. Now, I don’t claim to have produced any masterpieces, but I did produce some images that I quite like the look of, and they allow me to remember that summer evening by the river in Guangzhou enjoying the view of the Canton Tower. Here’s my fave: 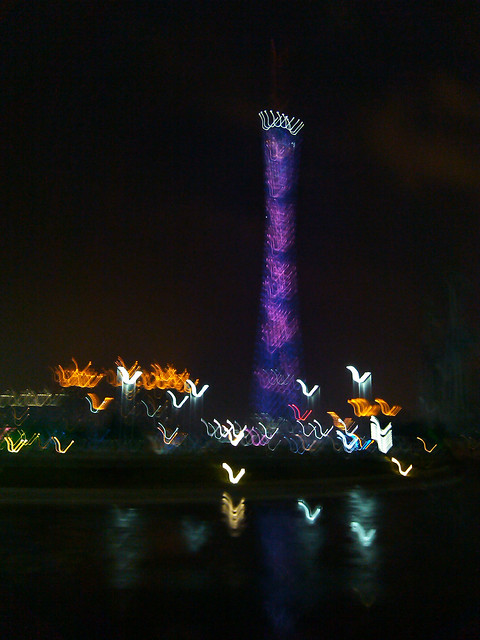 One of my goals as a photographer is to be increasingly flexible. It’s easy to get into a rut, sticking to what you know, what’s safe, what has always worked for you, but that’s also the best way for your photography to stagnate. I’m sure you want that to happen to you no more than I would like it to happen to me. One way to avoid that, is to open our eyes to new ways to capture images in a way that both utilises the best of the tools we have to work with, but also that celebrates the limitations and their inherent beauty.

By the way, if you’re unfamiliar with Canton Tower, here’s a shot of the structure I took early one morning… 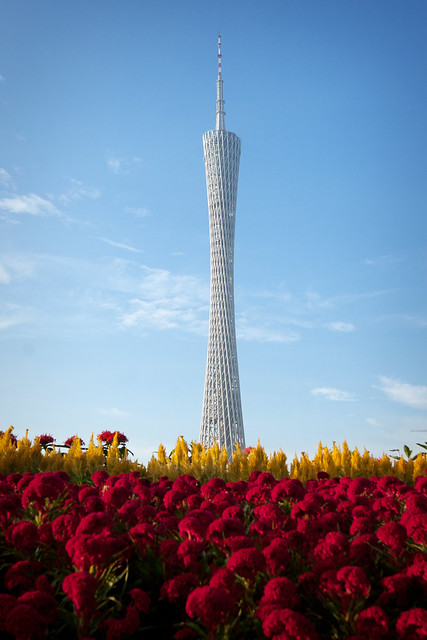