Posted by adamrobertyoung on 16/11/2012 in Behind the scenes, Photojournalism | 5 Comments

After so many trips to the same urban villages in Guangzhou, I was in need of something fresh. I love the urban villages – photographically there are so many things that make for interesting images with great textures and lighting that inspires me every time, as well as the fact that they’re populated by a group of people I empathise with on a deep level: migrant workers. But wandering the same villages time and time again wasn’t doing it for me anymore. I find each urban village has its own character, and they had all become so familiar to me that there was no longer a sense of discovery and exploration when I returned to them. I felt uninspired.

So I jumped onto Google Earth and searched for the clusters of densely-packed buildings that stand out so clearly from the surrounding highrise complexes that make up most of the city. Before long, I’d located a village I’d never been to before, an urban village called Tangxia (棠下). 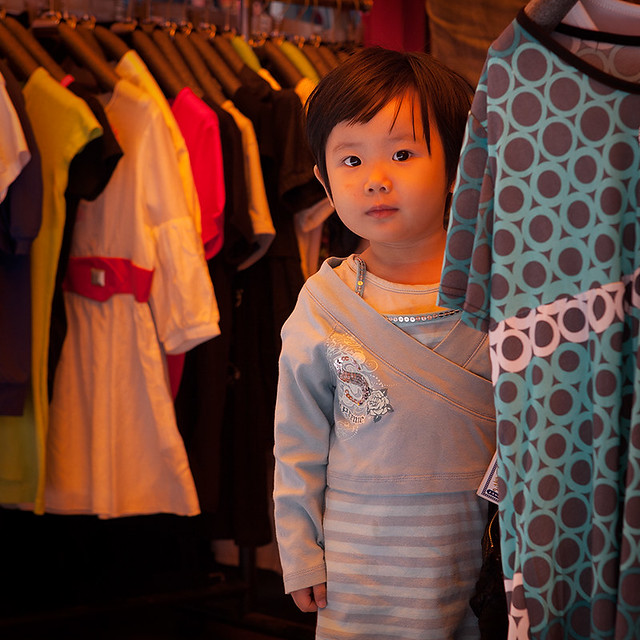 About one minute after walking into the village, I spotted this little cutie in one of the marketplace stores

Instantly, my energy level shot up. Everything was new and exciting again. Guangzhou’s urban villages are veritable labyrinths, and once again I had no idea what I would discover around the next corner, and the next. I think one of the things that many photographers have in common is a child-like curiosity and desire to explore. Photography gives me an excuse to throw myself into new places and to truly appreciate the environment I’m in. It also helps me to see the beauty in things that most people would only see as ugly, dirty, and generally undesirable.

For one, the sanitary conditions in these communities is far from ideal. Rubbish is dumped in various random locations throughout the villages by residents, and collected by a team of street cleaners. While they are quite efficient in their work, the rubbish may sit in the alleys for a few hours at a time, attracting rats. Judging by the number of rats I saw on this particular trip, their population rivals that of the humans in the village. The problem is compounded by the fact that due to the poverty in these areas, local residents also go through the trash to search for paper, plastic, and any other materials that can be sold to recyclers. In this process, they tear open bags of household waste, making it even more attractive for the rats. 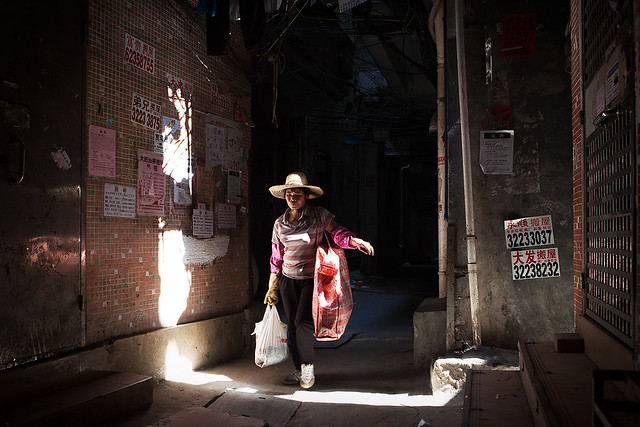 The candy-striped bag she is carrying is full of collected items (this image was captured on a second trip two days after the one above, thus the different clothes)

One of the official street cleaners waits in the shadows. Garbage is piled up like this throughout the alleys and collected by a large pedal-powered cart that winds its way through the laneways.

The situation overhead in the alleys is not much better. The tangle of electricity, television, phone and internet lines is a feature common to all urban villages. The villages are mostly self-regulated, so locals largely manage the infrastructure themselves. On my trip to Tangxia, I stumbled on a local atop a ladder trying to tie the mess of cables together. Basically in the alleys, if you want something done, you’ve gotta do it yourself.

Without the support of local council, locals make do with whatever materials they can get their hands on to help maintain the villages’ infrastructure

But it’s not all bad. In these communities, there are some beautiful historic buildings – temples and ancestral halls are scattered throughout, looking as though they were dropped from space in the middle of the clustered housing.

One of many traditional buildings in Tangxia village. When these urban villages are demolished, often these historic buildings are reduced to rubble along with the rest of the village.

The entrance to the courtyard above

I was pleased to see in this village, that some of the traditional architecture that had fallen into disrepair was being restored. While that’s an encouraging thing to see, it’s still doubtful the villages will exist at all ten years from now, so it feels a little like they’re building sandcastles just before the tide comes in.

A worker carries buckets of cement which are then hauled up onto the rooftop by a rope to complete the roof’s construction. Most labour in the alleys is done manually – hard work and low pay.

Some of you may wonder what draws me back to these places again and again. There’s so much that appeals to me in these places. For one, it’s a part of the “real” China that doesn’t get much exposure outside the country. I like being able to reveal a world within Chinese cities that would otherwise go largely unseen. But along with that, there are two big reasons I love these communities…

The first is the light.

I’m in love with light and the dramatic things it does to otherwise mundane objects and scenes. As the buildings in urban villages are so densely constructed – 5 to 7 storey buildings with an average of 50cm to 1.5m between them at higher levels – they form a kind of artificial ravine. The sunlight filters down through these “fissures” resulting in a very unique quality of light: a strong contrast between dark areas the light can’t reach and distinct areas of brightness. This is a photographer’s playground!

Looking up, it’s easy to see the way the density of construction creates this special lighting

In some parts, daytime is just as dark as night, with lighting required 24 hours a day (this was about 3pm)

A worker on the ground floor of a building under renovation mid-afternoon. Without artificial lighting, they would be working in the dark.

A camera-shy girl roams the alleyways

But if it were just the light, I’d probably have grown bored with them by now. The second thing that keeps me going back is the people. The urban villages are largely populated by migrant workers. Looked down on by locals, they find refuge and a sense of community in the villages. Personally, I’ve found them to be warm, genuine folk, and as we share a similar background (I certainly wasn’t born with a silver spoon in my mouth), I feel some kind of connection with them. Going to the alleys is not only about the photos, I inevitably have some interesting conversations that give me a deeper understanding of what makes people tick here, so it becomes a social experience too. 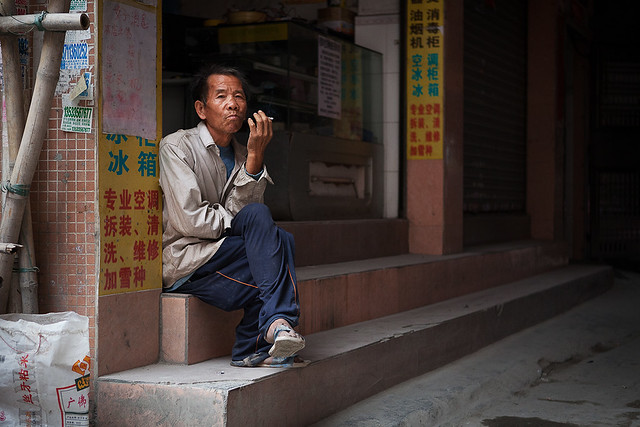 This guy looked fierce, but he turned out to be quite nice. He was confused as to why I would want to take a photo of him, as most Chinese people find it hard to get their head around my concept of photography. They think photography is about taking pictures of beautiful things, places and people. Why would someone want to take pictures in urban villages of normal people? 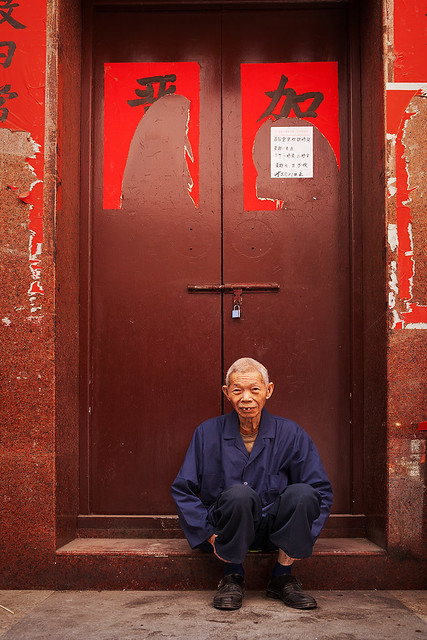 I often use the LCD display on the back of my camera to connect with people. This guy was quite happy when I showed him the pictures I took of him, picking out this one as the one he liked best. 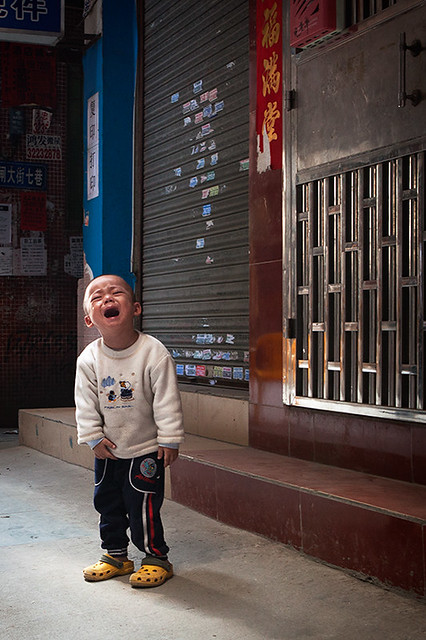 I don’t know what this kid was crying about, but I took some more photos and showed them to him on the LCD display, and he forgot whatever he was crying about and cheered up. His mother was quite happy about that! 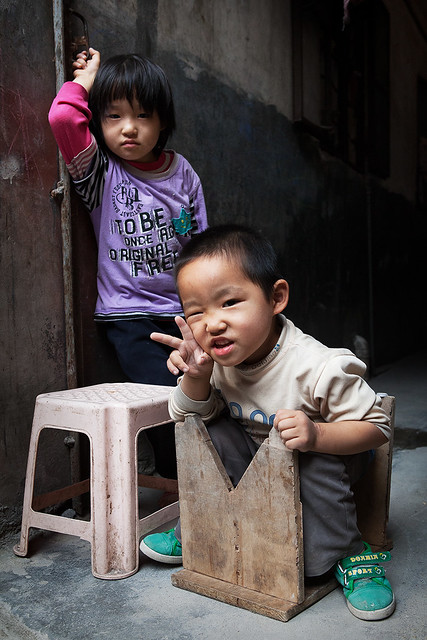 These kids are members of an unfortunate group. As their parents are migrant workers who don’t have registered residency in the city, they are not given the right to free education in public schools within the city they’re living in. As the families are living on very low incomes, private schooling is out of reach, so many are forced to go without altogether.

This boy, who came from Hunan province with his family of migrant workers, is lucky enough to go to school.

Some may be wondering what the numbers and stickers that cover the walls in many of the photos here are. They are a form of advertising used by local businesses – some legit, and some not. Services include anything from removalist services and appliance repairs to some shadier offerings such as fake receipts (people purchase a product for their company for, say, 1000RMB, and then get a fake reciept for 1500RMB and pocket the difference when they are reimbursed by their company), and counterfeit seals and stamps (used to verify official documents).

Whatever their purpose, they create interesting texture and bring additional colour into the scene.

And when combined with the plumbing common to the urban villages, there’s unique scenes around every corner

Yes, I’m quite partial to those pipes!

So it’s easy to see that on my first visit to Tangxia urban village (and the subsequent visit two days later), my hunger for exploration, light, textures, people, and social connection was well and truly satisfied. I felt inspired once again.

My new challenge is to find such inspiration outside the villages…