The challenge of colour photography

Posted by adamrobertyoung on 05/09/2013 in Advice, Photoshop and photo editing | 5 Comments

Here’s a photo I took last month in Ho Chi Minh City, but it’s a photo you will never see published on my website, you won’t see it in any of my books, and I’ll never print it out…

It’s not that it’s a terrible photo (although it’s certainly not a great one either). The fact is that I liked my encounter with this motorcycle taxi rider, but there was a problem that led me to take desperate measures in my image editing.

I guess it all sounds a little cryptic, but the fact is, I would not display this image publicly (apart from for the purposes of this post) even if it were an emotive shot that was brilliantly composed (which, let’s face it, it ain’t), and the reason is that it has been doctored.

Of course, I do tweak all the images I create in Photoshop to bring what the camera saw closer to what I saw with my eyes and through the filter of my own perception, but not like this one. Truth is, that bus in the background was actually green.

Here’s where the whole challenge of colour photography comes in. You may have a good image – or even an outstanding one – where all the elements work together perfectly, but if the colours don’t complement or clash in a way that draws attention to your subject (rather than distracting attention from it), it will fall flat.

Take a look at some of your favourite colour photographs, and you’ll likely find there is a cohesion between colours in the overall scheme of things. Any clashes are likely to be the subject clashing with the surrounding negative space, which makes it stand out. I could go into colour theory and show the colour wheel, expounding a bunch of theories that anybody could Google anyway, but that’s not the point of this post.

The point of this post is to simply highlight one thing that makes colour photography an engaging creative process, as it involves paying attention to all the surroundings as well as the subject you’re shooting (we tend to only focus on the subject unless we make an effort to look beyond that), and working out how to make the colours work for you, rather than against you. This is something black and white photographers do not need to consider as much, as they work more with tones than colours (which I also admire, it’s not easy to imagine how a scene would look with the colour sucked out of it). A red bucket in the background may look pretty similar to a blue one in a black and white image, but that bucket may just kill your image if you’re shooting colour.

When I look back at some of the images that I’ve created that have resounded the most with me, I definitely notice that one element that makes them work for me is the way the colours work together. Here’s some examples… 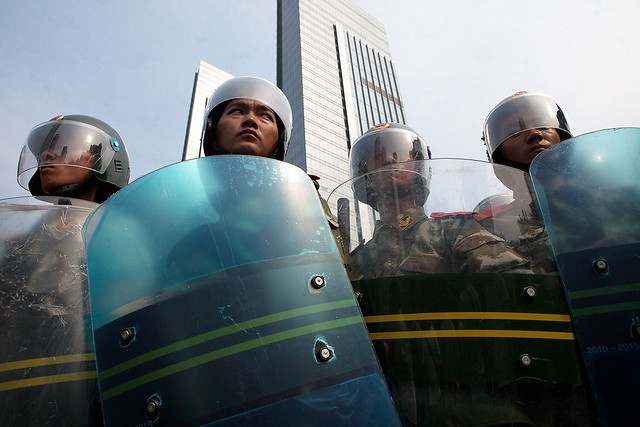 In this image of anti-riot police that formed a barrier to contain protesting residents in Guangzhou last year, if there were a coloured sign – say a red one – on the building behind them, the image would be ruined, as the viewers’ eyes would go directly to the sign firstly, rather than to the faces of the officers (particularly my main “character” – the guy second from the left). 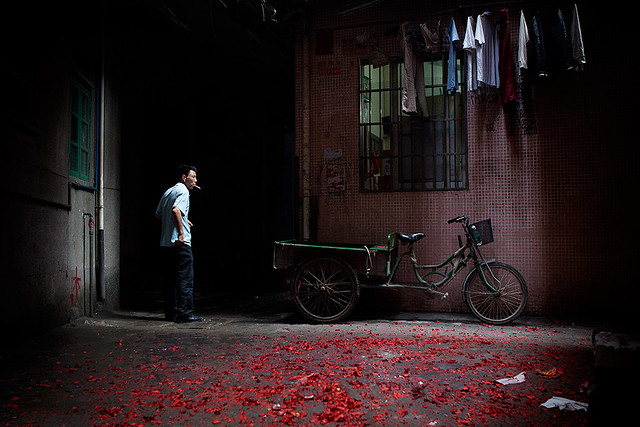 In this image taken in the Chebei urban village, Guangzhou, the red tones (the remains of firecrackers, painted characters and the tiles on the wall) and green tones (the bike, window frame and flourescent light inside the home) complement each other. Were the building’s tiles yellow, blue, or almost any other colour, the image would not work as well (maybe not even at all). An image will always be dramatically better if the colours work well together. 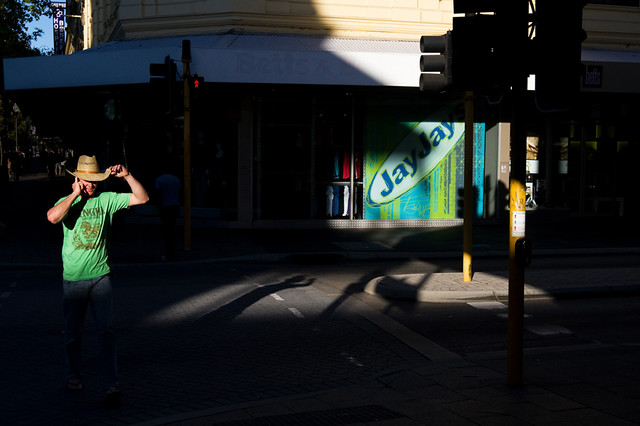 In this shot of a tourist celebrating St Patrick’s Day in Fremantle, Australia, the colour of his shirt connects him with the sign in the background, and the yellow of his hat is reflected in the traffic light post and the building in the background. The consistency of colours creates a unity that ties the whole image together.

So now, back to the guy sitting on the motorbike here in Vietnam that inspired this whole post… Unfortunately for me, the Saigon traffic stops for no man, and as I was trying to capture a natural expression on the guy, I couldn’t stand there for 30 seconds and wait for the bus to get out of the shot. As a result, the unedited image is ruined by the bus, as it distracts the viewer from the subject – that is, the guy on the bike.

Honestly I’m not a massive fan of the photo even with the colour adjusted. Even if I loved it, however, as I claim to create images that document reality, I could never use an image that had been given so much digital cosmetic surgery. I’ll always prefer natural to fake (probably why I’m not a big fan of poorly-done HDR photography, or botox and breast implants for that matter).

But you know, that’s what contributes to the thrill of getting a great shot! When all the elements come together and complement each other, and you get an image that has a cohesion that makes it a pleasure to look at… that is pure bliss, and one can’t help but be filled with a sense of achievement. Anybody can play god in photoshop to “fix” what they didn’t get right at the time, but there’s no glory in that. My respect is for those that manage to capture those fleeting moments when it all comes together. And that’s what keeps me shooting: the quest for that next shot that is even closer to the sublime than the last. And I don’t know about you, but for me sublime is still a long way off…

← Hunger and curiosity Chocolate and an unusual delicacy in Vietnam! →