Posted by adamrobertyoung on 07/04/2014 in Behind the scenes, Magazine work | 4 Comments

Just thought I’d share some snaps from the last two issues to show the range of photos I’ve been called on to take for Oi Vietnam over the last two months. Some are more fun than others, but if anything, I’m learning to be more and more versatile!

If you’ve been following my blog, you’ll have read about my favourite photo from this period – the ghost photo I took for an article on the myth that the Saigon Fine Arts Museum is haunted.

You can read the secrets of what went on behind the scenes here.

On a particularly hot Saigon day, I had two outdoor shoots – one in the morning and one in the late afternoon/evening. The first was for an equestrian venue – the first of its kind in Vietnam. It was a couple of hours out of the centre of Ho Chi Minh City (I even saw my first wild Vietnamese snake slither across the road on the way). 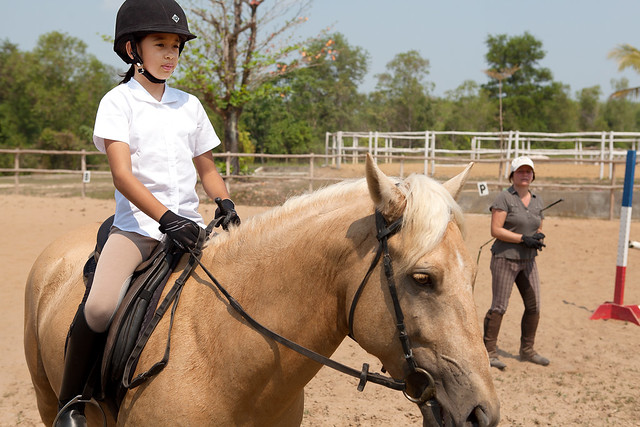 There were two things that really struck me that day. The first was the level of discipline, high standards and finesse exhibited by the trainers and riders. Secondly, it was great to see the deep sense of affection everybody involved had toward the horses. It was more like a partnership than the human dominating the horses. 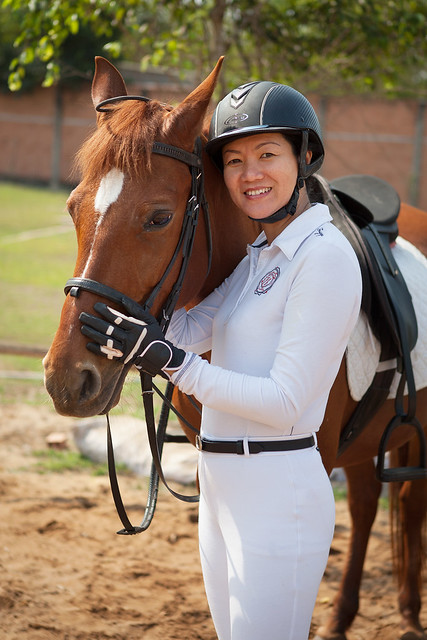 After returning to the city and having a quick bite at Maccas (my first and possibly last time to try McDonalds in Vietnam), I headed for one of the ritzy hotels in town for my second job of the day – a rooftop pool party event. 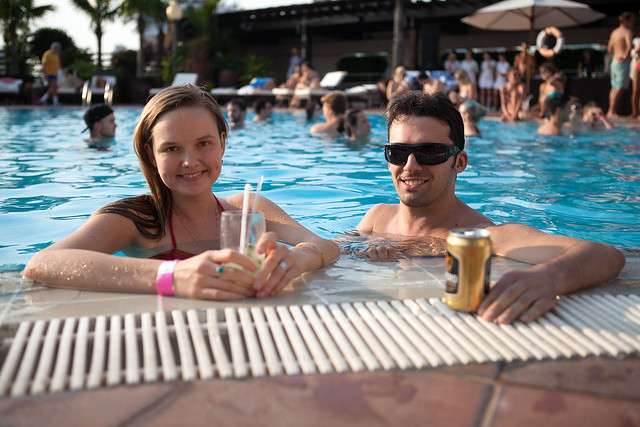 Honestly, events like this are my Achilles’ heel when it comes to photography. You’d think someone so interested in social documentary would be in his element with so many people around! But I wasn’t. Perhaps I’ll do a post some time about why events like these make me feel so uncomfortable, but there’s too much to talk about to squeeze into this one! Let’s just say I’d much rather spend an afternoon with a group of street cleaners than with the young silver spoon crew. 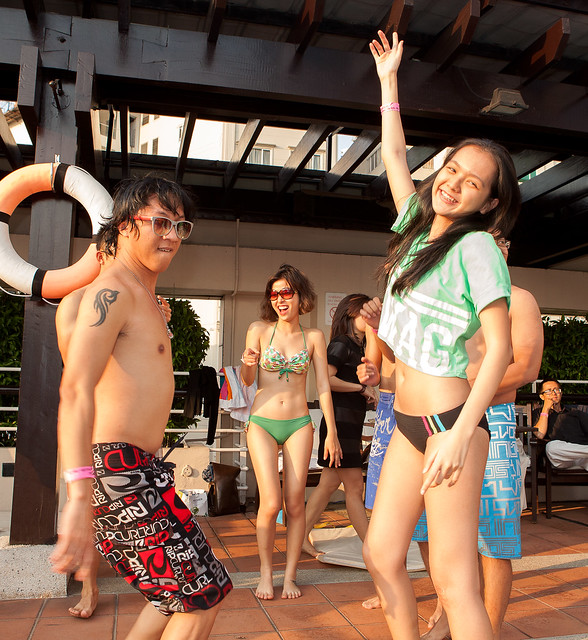 Anyway, I did meet some nice people, like the girl dancing to the right in the above photo. She was one of the DJs for the event, and was a sweet, funloving local girl. The chat I had with her was a refreshing oasis, but alas, I had to return to the desert to get the rest of my shots…

I left for a bit, chilled in the park next to the hotel to try to stir up some inspiration, and returned just as it was getting dark. 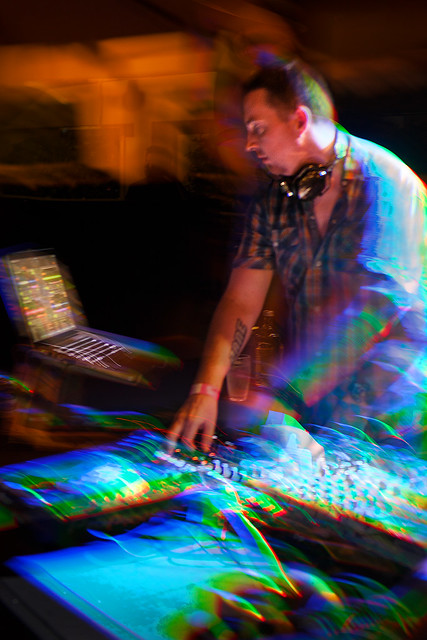 I left feeling quite deflated. It was one of those days when you just can’t get in the zone – at least the second half of the day, anyway. Getting paid to take good pictures is great when you’re vibing, but when it’s a struggle, the knowledge that nobody wants to hear excuses and demands quality shots can really be a heavy weight on your shoulders! Thankfully I’ve got a very supportive wife to go home to!

Of course one of the best things when working for a lifestyle magazine is the restaurant articles – ’cause you shoot first, eat later! Living on a modest income here in Saigon, I don’t get to sample some of the finer dining establishments in my free time. Thankfully, I can do it when I’m working!

Hopefully you’ve already taken a look at some of the food photos from the restaurant Indaba (here). Those shots are actually for an ad for the restaurant after I took some other photographs of their food for a review in the magazine. Here’s one of them:

One tip: when shooting food like spring rolls, they’ll always look better after you’ve taken a bite out of one. It’s not just about showing what’s inside – it just looks better!

Indaba has a bright, fresh and slightly funky feel, with three distinct areas each with their own ambience. I know a wall of random photos is done to death, but I liked the energy the random stripes of vividly-coloured paint behind them brought to the space. 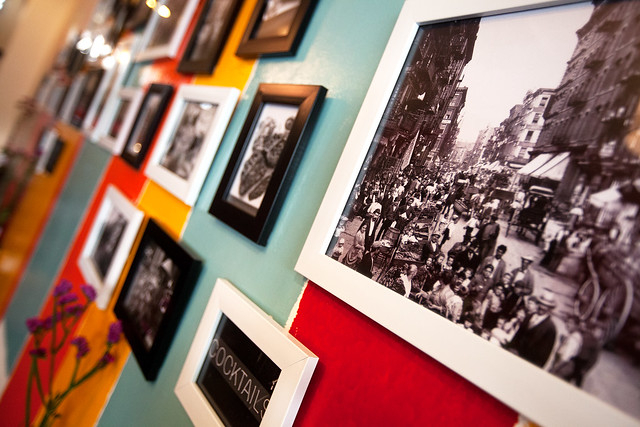 I also got to sample the food at Baba’s Kitchen – an Indian restaurant that serves both northern and southern Indian fare. The prices here are quite reasonable, and I took my wife back a few days after doing the photos.

The shot below is not really a good food shot, but I still like it. I like the repeating triangle motif! 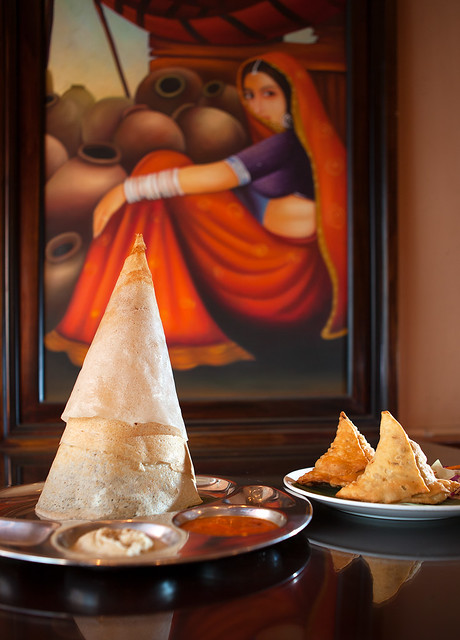 I took the painting down off the wall to sit behind the food for a more interesting backdrop.

One of the fun shoots that was used in the March issue of Oi was the ballet dancers in the city. The photos almost went viral here in Vietnam, probably partly due to this one:

What I didn’t realise at the time was that the dancer in the picture – Doan Vu Minh Tu – is a contestant in So You Think You Can Dance Vietnam, so her rising fame may have contributed to how quickly the photo series spread online.

One of the shots even “accidentally” made it onto the cover. 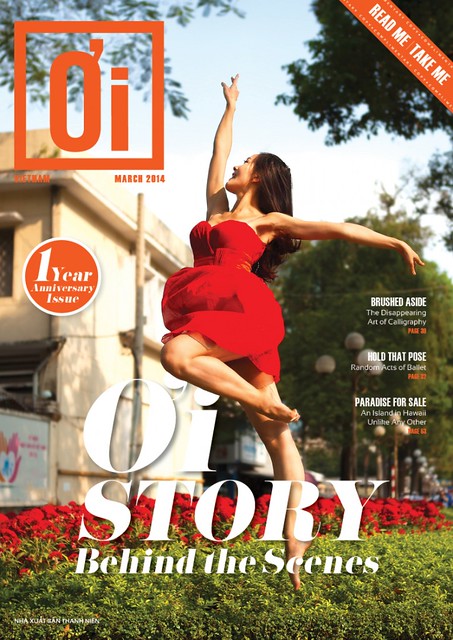 Details and the other shots can be seen here.

The April issue of Oi was centred around marriage. One of the articles was about foreign-Vietnamese couples. I had some wild ideas for some conceptual shots for the article, but the budget wasn’t there, so I just took some simple couple shots.

The first couple was pretty easy to shoot. At first they felt a little unnatural, as the newlyweds had just had a bunch of Vietnamese wedding photos taken (which are generally quite contrived) and they expected I’d be doing the same. I needed a way to get some genuine smiles, so I asked for the bride to jump onto the groom’s back. They struggled to balance for a second and started cracking up. Great! Now they were relaxed, I took a couple of shots him piggybacking her, and I knew I had the genuine smiles I was looking for to show their close relationship. 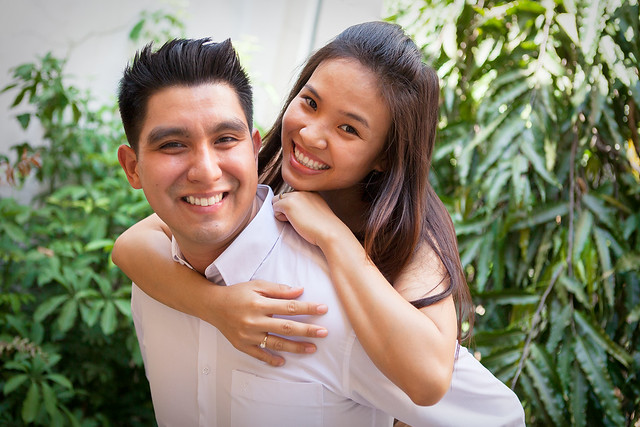 The next couple was more of a challenge. They were really nice people, but Cuc, the woman, felt quite nervous during the shoot. She spoke very little English, so I thought I’d have her husband Franklin help encourage her so I could get a little smile from her, but his approach was to bark out the command to smile! This made her even more nervous. On top of that, Franklin had quite a serious – almost aggressive – look in the shots. He told me “I don’t smile in photos. Even when I was a kid, I never smiled. I don’t know why”. After a little while, Cuc relaxed enough to start to smile, and I found some shots where Franklin was not smiling a little less than in the others, so they became the shots! It’s amazing ’cause he was a really warm kinda guy. 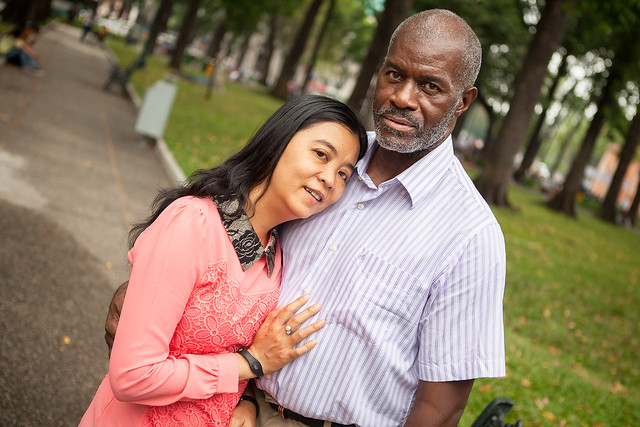 I’ll admit, posed photographs are always gonna be a bit of a challenge for me, as my kind of photography is to capture people in their natural state. Candid shots. I’m not charming enough to get people to feel really comfortable posing for photos – probably because I feel the same awkwardness when I’m in front of a camera rather than behind it!

One posed shot that I did enjoy taking, however, was the one for an article on “a day in the life of a magazine editor”.

But back to the wedding theme. I did a shoot that tried to tie the wedding theme to some things that are more typically Saigon, so I picked one of the recognisable local churches, and had a bride and groom about to set off on their honeymoon on the back of a Vespa. 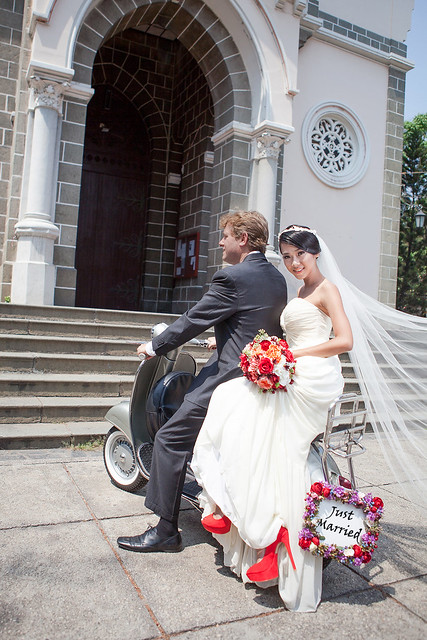 The shoot was a disaster for reasons it’s too soon to talk about, but the 1hr 40min delay in starting was a large part of it (the cause of the delay is still a sore point). In the end, the shade I was meant to be shooting in was gone, so we had strong direct sunlight that I could not really avoid or deal with effectively with the gear I had on hand. In the end, the shot which was originally intended for the cover was relegated to a page further into the issue (minus the “Just Married” text, but let’s not go there…). I was not happy with the shot, so I can understand the decision to go for something else. Perhaps it’s the universe’s way of rebalancing after the unintended cover of the previous month?

After the shoot proper, I took a quick snap of Jenny the model – this time in the shade of the church doorway. 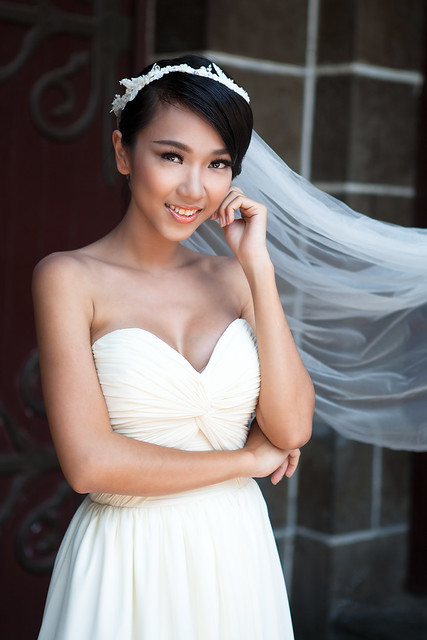 What a difference nicer light makes! This is lit by sunlight reflected off the concrete around the church – no flash or reflectors.

I finished off the month with two events, thankfully ones I felt right at home with…

The first was a visit by Kenn Nesbitt – an author of children’s poetry books from the states – to an international school here in Saigon. The event had three parts that I attended: 1. a workshop where Nesbitt worked with students to create poems of their own; 2. an assembly where students did Nesbitt-inspired performances in front of guests and their fellow students; and 3. a book selling and autograph session. 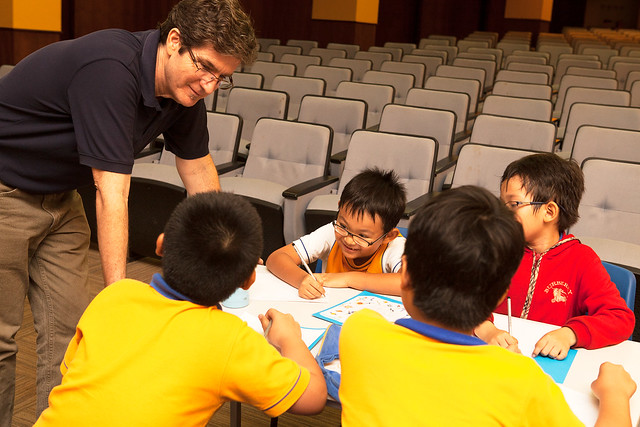 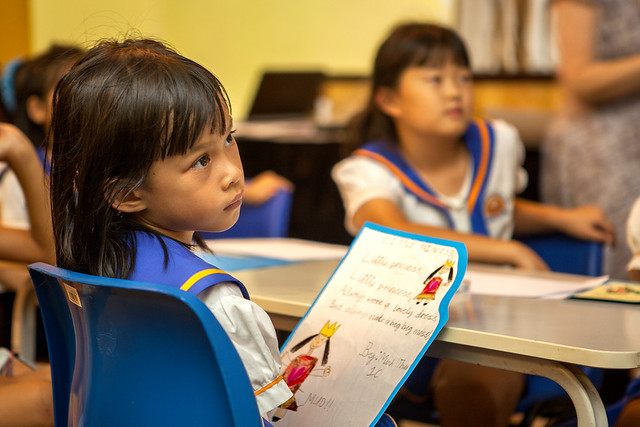 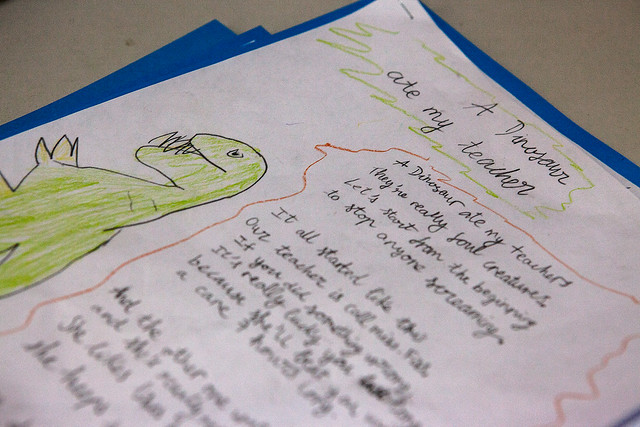 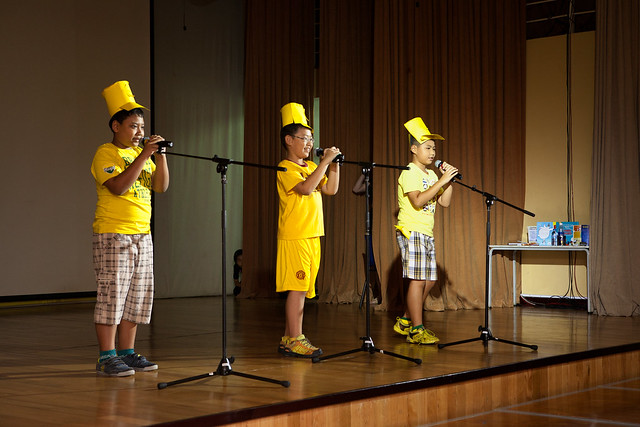 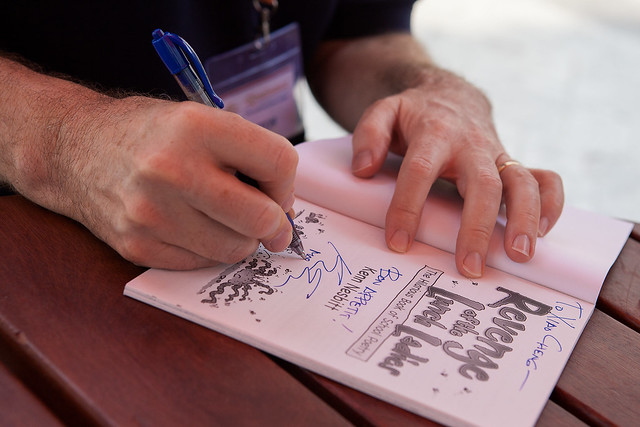 Honestly, the day had me reminiscing about the 13 or so years I spent teaching. I even missed the kids that had previously given me nightmares!

It’s a good thing I didn’t lose my love of kids during all those years as a teacher, ’cause the other event was a family fun day at another international school.

It was definitely a fun day for the kids, with jumping castles, games, cotton candy, face painting, and a bunch of other great activities for them. 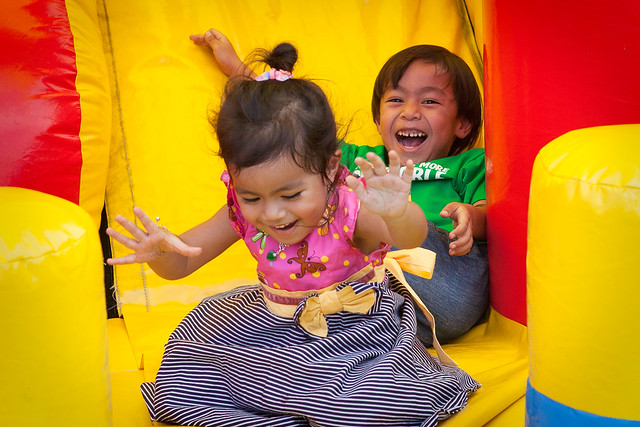 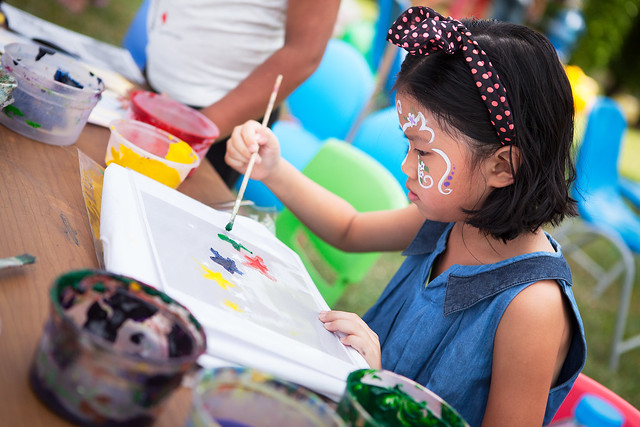 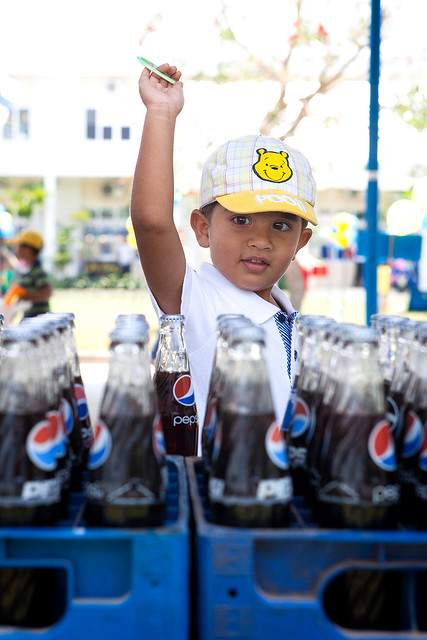 The one my inner child was the most excited about were the huge inflatable spheres that kids could get into and play on the surface of the swimming pool in. They were awesome! 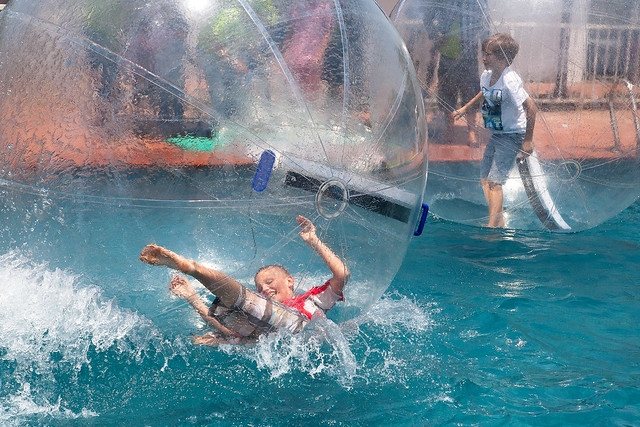 So there you have it. It’s really impossible to predict what will be next. Sure, there’ll always be a restaurant or two and a couple of events, but beyond that, it’s always a surprise!

This month I’ll be taking photos for articles on:
i. a sand artist (I still don’t even know what kind of sand artist – do they make sand sculptures, use coloured sand, or is it sand painting?);
ii. French influence in Ho Chi Minh City;
iii. heritage conservation in Vietnam
iv. prescription medicine
v. an upmarket Chinese restaurant and
vi. possibly a vegetarian restaurant (doesn’t sound exciting, but I’ve had some pretty awesome dishes that I would have sworn contain meat in a Chinese monastery, so I’ll keep an open mind).

But in the meantime, you can download a copy of Oi.

← A simple but magical trick for food photography… The rice farmer →