Home » Photowalks » My photographic tour of Saigon gets its first review…

My photographic tour of Saigon gets its first review…

Posted by adamrobertyoung on 15/06/2014 in Photowalks, Street photography, Travel | 3 Comments

OK, so it’s technically not my tour – I’ve recently started leading some of the well-established “Moto Foto” tours, a 4-hour photographic workshop and tour of Ho Chi Minh City – but I definitely give it my own twist! What better way to get to know your camera and its functions than being taken to shoot in some unique parts of the city that most tourists never get to see? And to top it off, we do it like the locals: on the back of a motorbike!

My very first Moto Foto tour was with Mark Prusiecki, and American who currently lives in Korea. Mark had already taken a photographic workshop in Cambodia, and took some decent photos, but I knew I could help him to take his photography up a level.

I picked up Mark from his hotel and took him to a cafe where locals bring their birds in cages each morning to chat and enjoy cafe sua da (Vietnamese-style iced coffee) with their friends. We sat and had a chat over a coffee so that I could get a feel for where Mark he was at in terms of what he knew, and what he hoped to achieve from the tour. Before long we’d discussed camera settings and their effect on depth of field and exposure, and Mark had the chance to put it into practice immediately (all photos in this post are photos Mark took on the tour, apart from the shots I took of him while he was shooting). 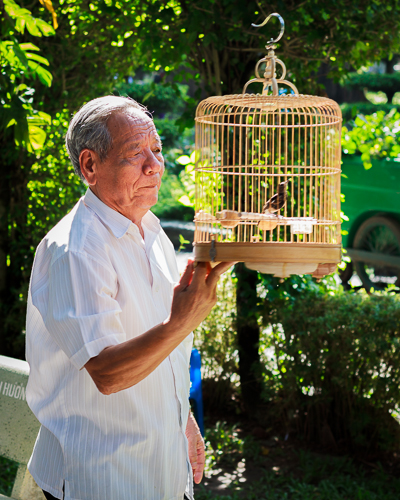 In this photo, Mark applied some of the theory we’d just discussed, including reading the light and using exposure compensation to get the right exposure (not too bright or too dark); depth of field and focus; composition and storytelling.

He had plenty more opportunities to cement his new understanding as we walked through the park. 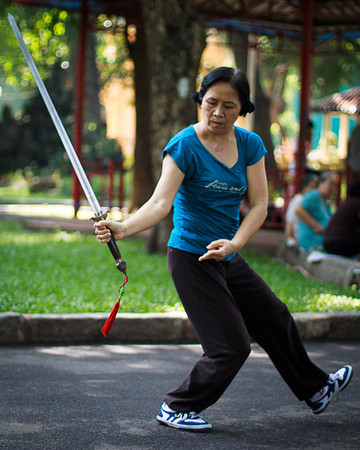 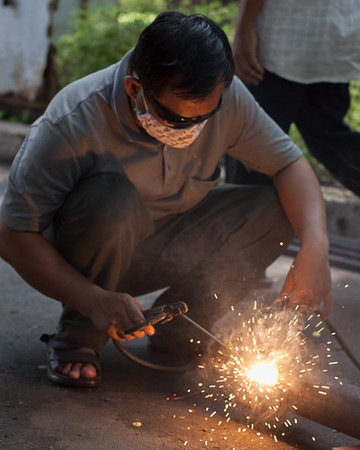 I felt he was making good progress, and would now be ready for the next stage – an authentic local market (no tourist traps like Ben Thanh market for us)! This would bring great opportunities for some amazing photos, but with the challenge of being a place with some tricky lighting where he would really have to take control of the camera settings (with my guidance, of course) to really nail the shots.

After introducing him to nuoc mia (a refreshing drink made of freshly-squeezed sugarcane juice and kumquats), we entered the market, discussed, shot, discussed again… 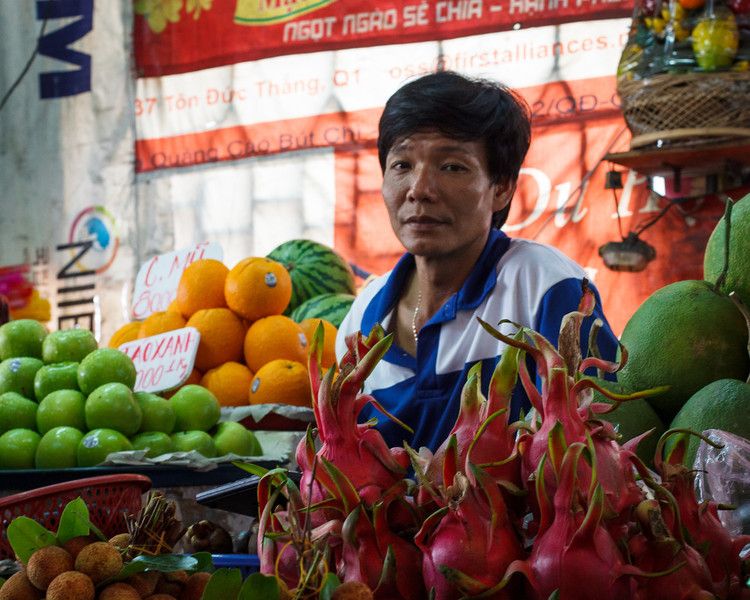 Mark wanted to try out using off-camera fill flash, and the market was the perfect spot to try it out. Before long, he was taking amazing shots! 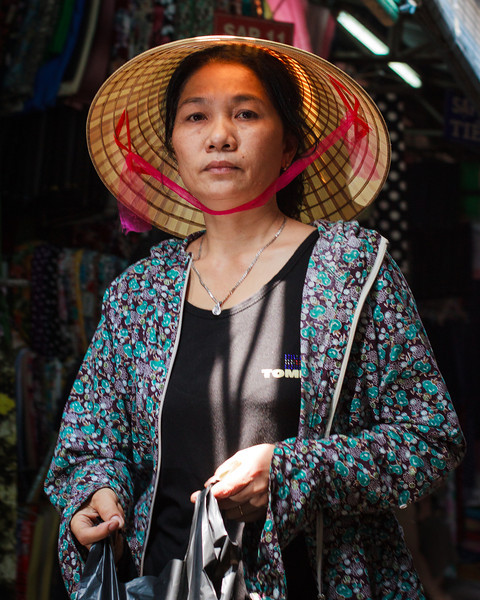 I found a spot with strong sunlight streaming down but dark areas either side so Mark could try using the flash to light people’s faces while still balancing the ambient light so that the flavour of the location came through and the photo looked natural. You wouldn’t think there was fill flash in this image, would you? Mark was surprised at just how natural it could look when used well, and some shots with no flash confirmed the difference. In the above photo, the lady’s face would have been too dark, especially the eyes, without the flash, but if the flash were not well-placed or too bright, it would have been unnatural and obvious! All part of the workshop!

I felt it was time to step it up again.

We headed to a temple that presents challenging but potentially beautiful lighting and subject matter. This would be the perfect place to apply what I had been teaching him about seeing the light and taking control of his camera, rather than trusting what the camera wanted to do. I was pleased to see he was really getting the hang of it, and it was great seeing how much he was enjoying the process. I had been talking to him about patience and not rushing things when shooting, and it was beginning to really sink in. 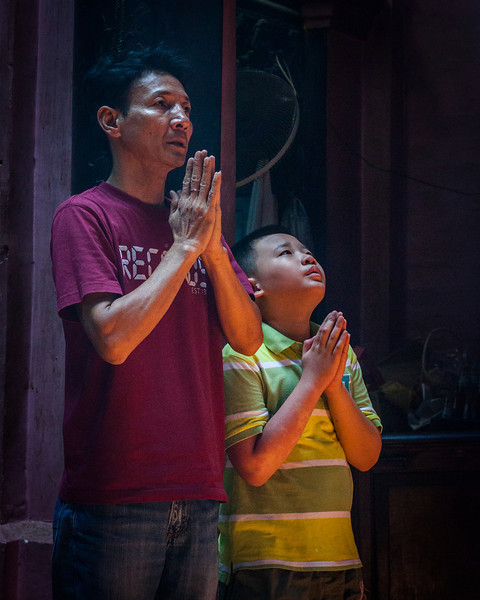 I was so proud to see him really nailing the exposure. 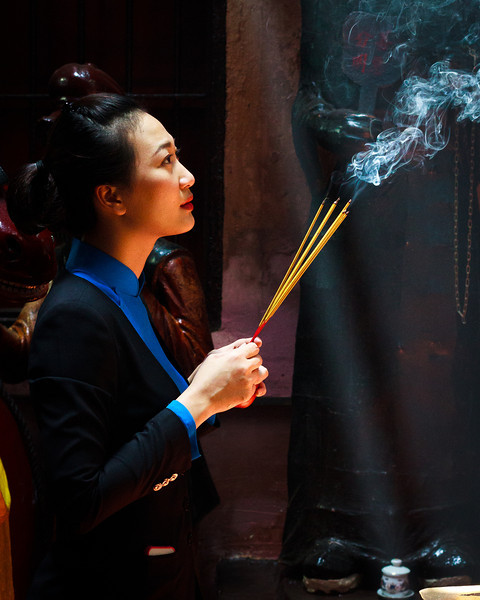 We wrapped up for the day, both happy with how the tour had gone.

Two days later, I met him again at his hotel bright and early. The motorbike drivers were looking cheerful as we headed for the first location. Mark had said he wanted the opportunity to try out a 150-500mm lens he had, so I took him onto the rooftop of an apartment complex that had a view of the river and the city.

On the way to the tower, I talked with Mark about using the rearview mirrors of the motorbikes to create some more creative compositions and he ended up creating this shot: 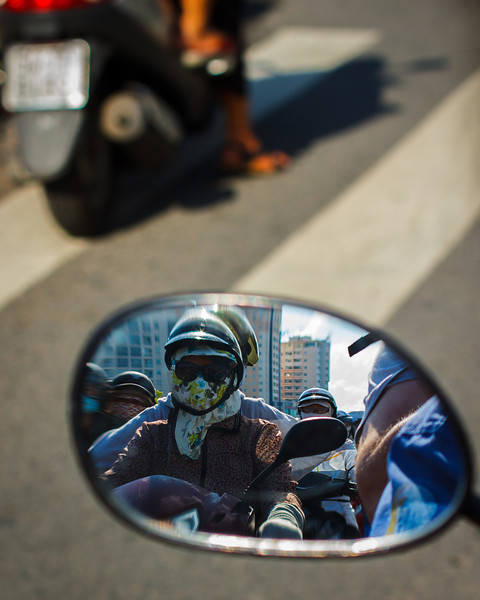 After arriving at the top of the apartment complex, Mark got to trying out his lens, and also applying his new-found patience to get some shots of boats travelling along the river and other interesting images. 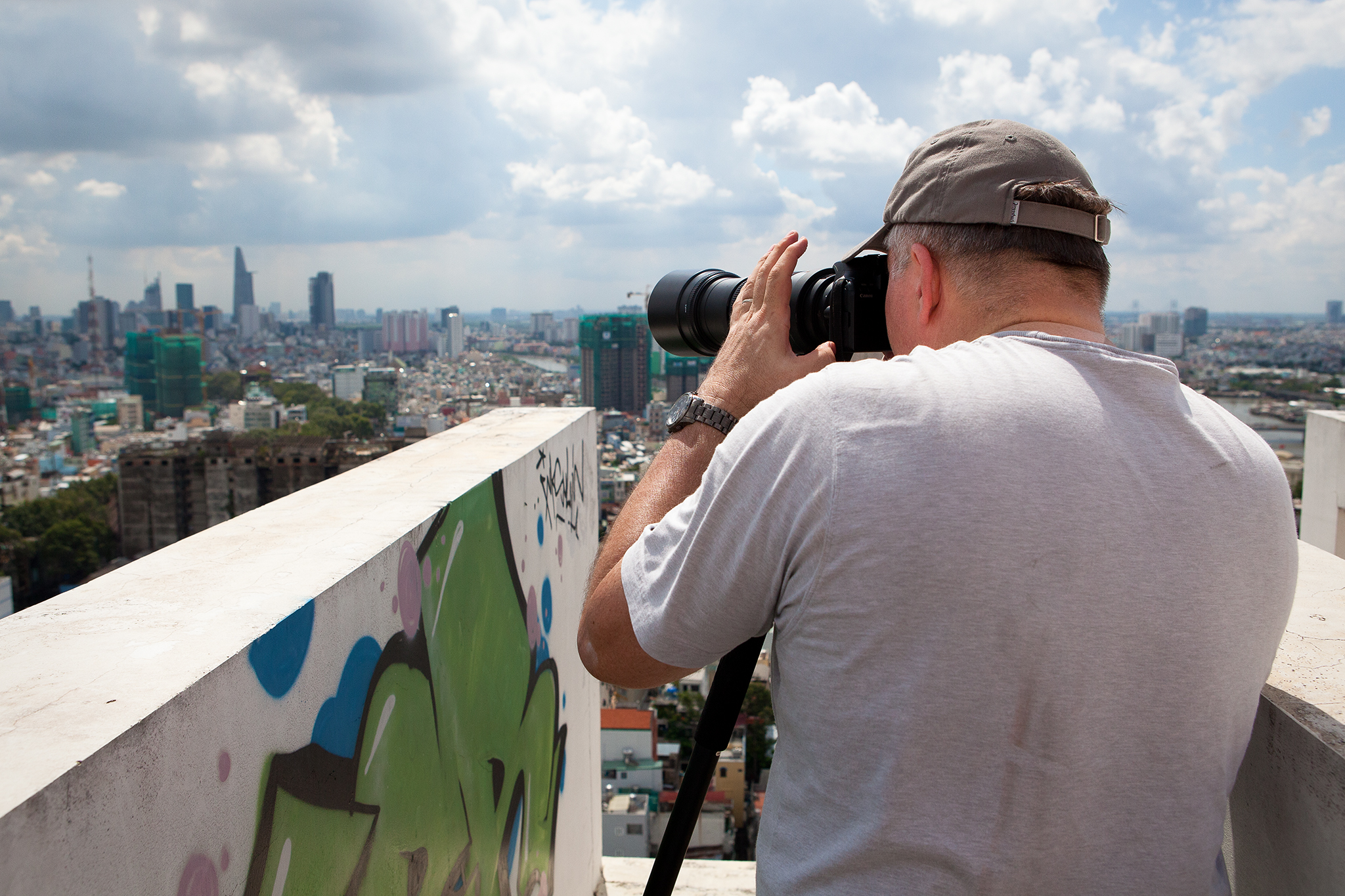 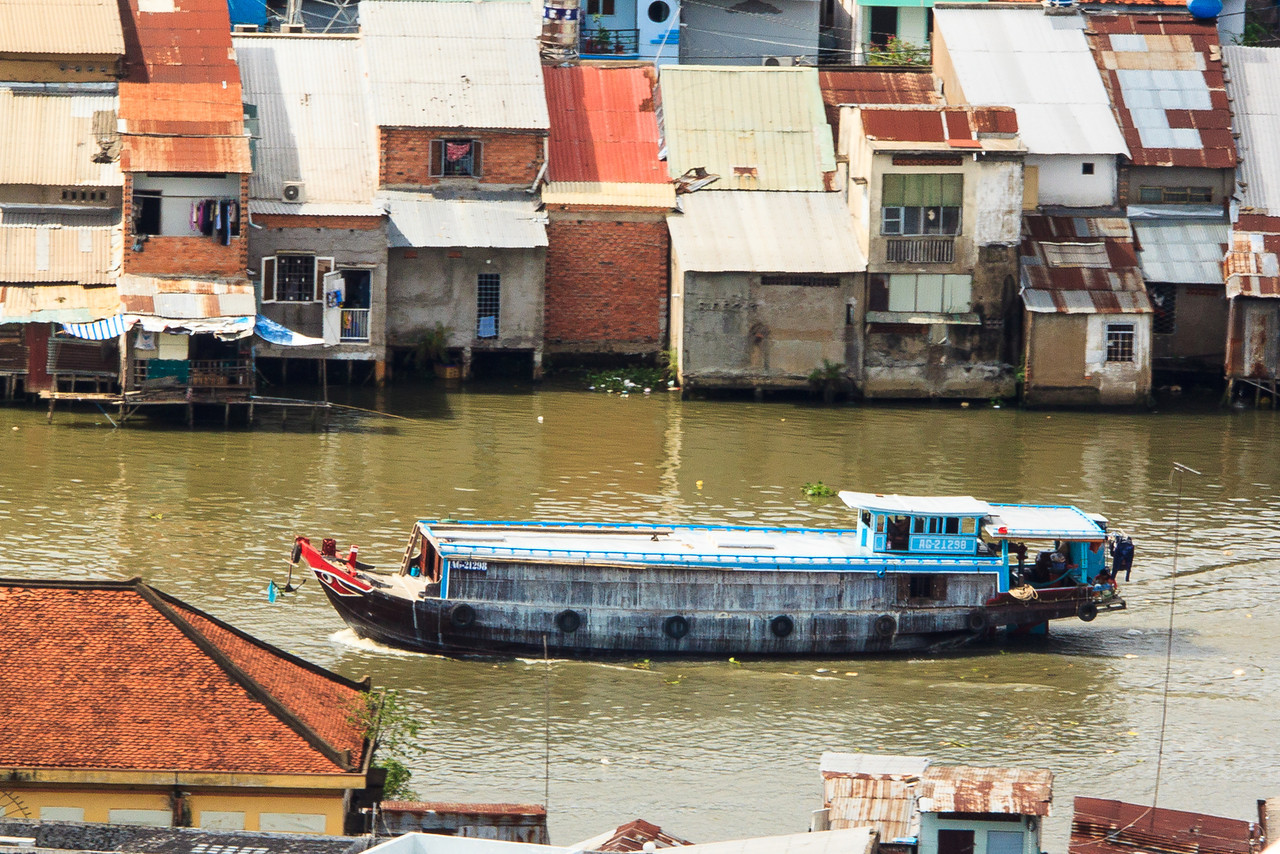 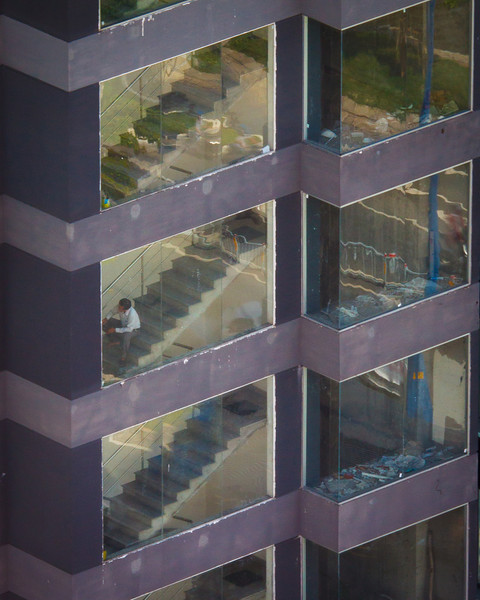 The final stop was a 50 year-old apartment complex that is due to be demolished at the end of the year once all the residents have moved out. This place is beautiful in its decaying glory, and I knew this would be the perfect place to bring all that Mark had learnt over the two days together to create some great images. 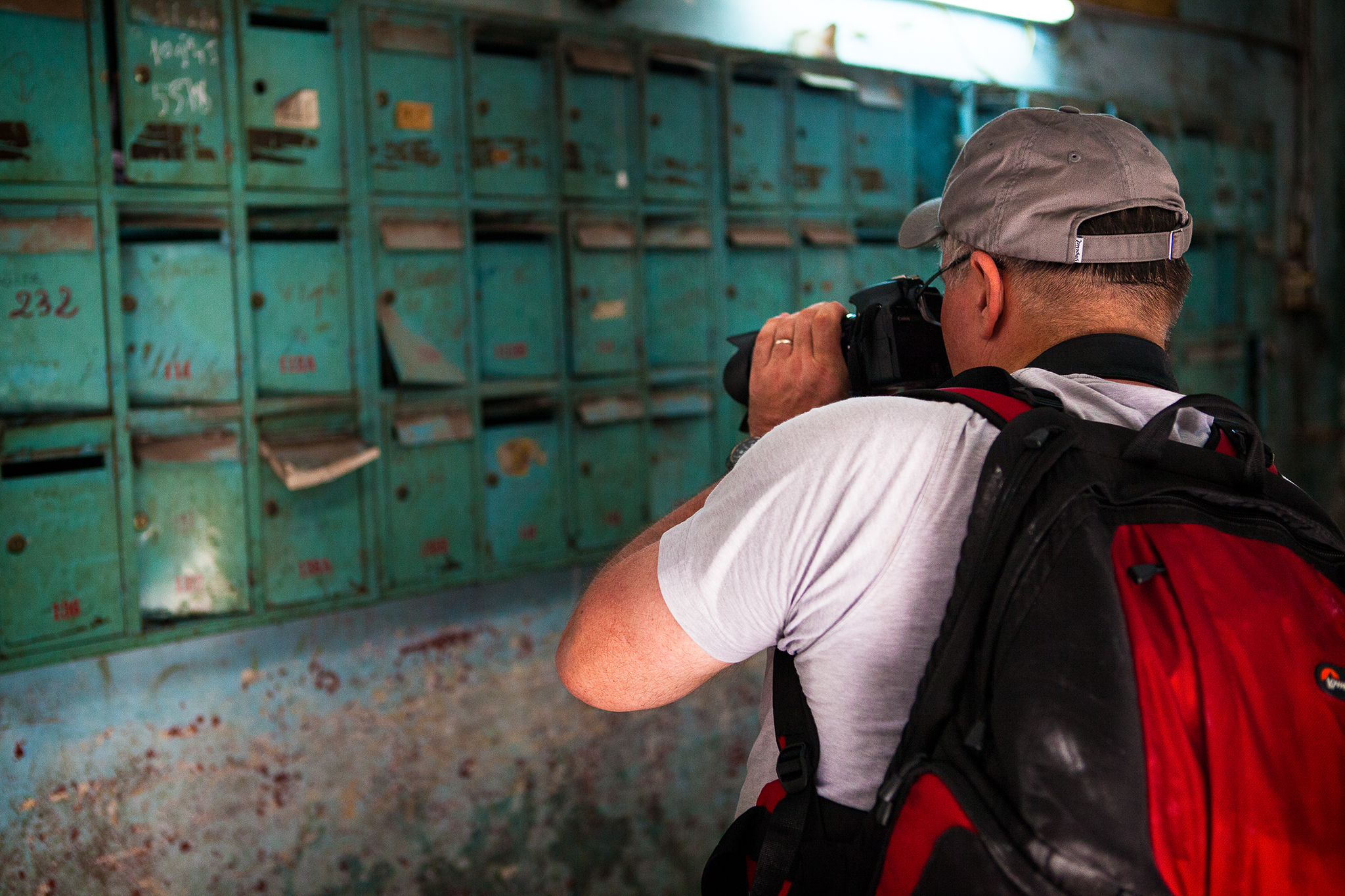 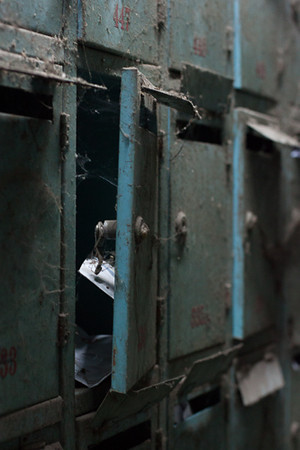 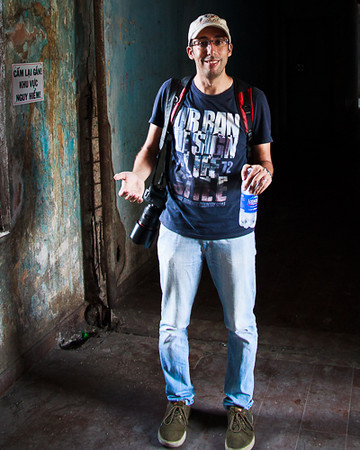 …but I forgave him when he applied it beautifully. 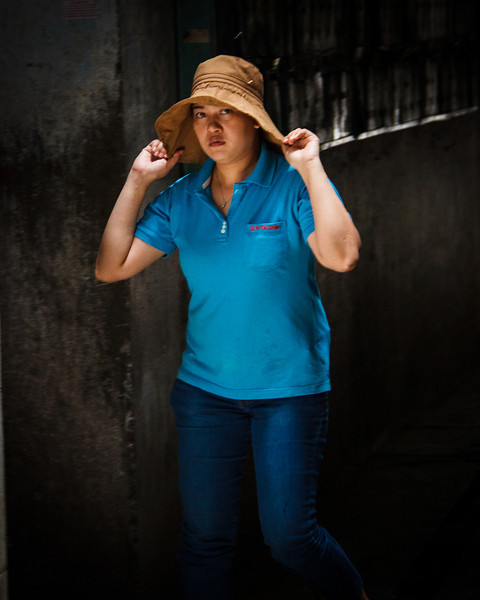 I was really happy when one of the residents spontaneously started doing kung fu poses for Mark to shoot, right where the light was working nicely! 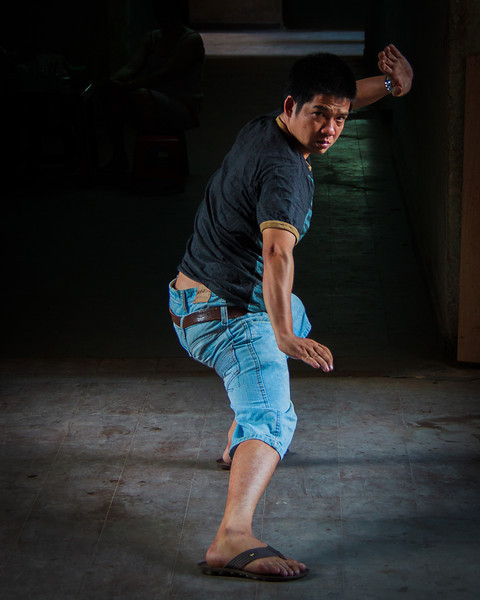 As we walked out to the waiting motorbike taxis, we both felt a sense of accomplishment. Mark because he had cemented some of the technical and creative aspects of photography that had held him back until now, and me because I felt I had unlocked some key areas that would now allow him to move on to bigger and better things photographically.

We actually went and had lunch together, and I went through some of the photos he’d taken in Saigon while not on the tour, and gave some tips for how he could improve on them. I was really happy to see later that he went back and reshot some of the photos with much better results. You know, I could really get hooked on this kinda thing! It’s where the teacher and photographer in me become one! A very satisfying experience – I can barely believe I get paid to do it!

I was really pleased to read Mark’s review of the tour. Here’s an excerpt (full review can be seen here):

“…Adam’s experience living in Ho Chi Minh city as well as his technical and artistic expertise made the day more than a tour of interesting sites. His detailed, friendly and patient suggestions helped me take advantage of the great places we stopped at on the tour. Adam tailored the tour so that I was always in interesting and unusual places were great photo opportunities appeared away from the usual tourist spots. After we finished the first day, I couldn’t wait for the next. Adam’s skill as a photo editor also helped me greatly. He took time to critique my photos and suggest ways to improve the quality and composition.”

If you’d like my help to step up to the next level in your photography, whether you’re a beginner or more advanced, I’d love to be of assistance! Maybe you just want to take that step from using your camera on full automatic mode to understanding the other functions more, or perhaps you’d like to work on taking unposed photos of people in their daily lives without them looking unnatural or you feeling uncomfortable. Whatever you want, feel free to contact me via the contact page on my website to organise a workshop tailored to your needs exactly where you’re at, or register via the Moto Foto site and ask for me (there are two other Adams, so be sure to use my full name)!