Saigon prepares to farewell an icon

Posted by adamrobertyoung on 31/08/2014 in Photojournalism, Travel | 4 Comments

Sitting in the centre of the downtown district since 1880, the Saigon Tax Centre has seen countless dramatic changes in the city’s history, and is set to witness one last one: its own demolition.

The building was originally built by the French and called Les Grands Magazins Charner. Over the years it has seen numerous facelifts, the most recent of which was in 2003, dramatically changing its facade to the current incarnation. But even this iconic building is not immune to the current push to develop the city which has already seen countless heritage buildings fall to the wrecking ball. It is planned to be replaced by a 40-storey highrise complex.

The building is currently flanked by a blue barrier that surrounds the area that will be the Opera House metro station six years from now.

News of the demolition came as a shock not only to local residents, but to store owners inside the building. They were given just one month to vacate the premises. Many had just received large orders of stock – including the large department store that occupies much of the building – and now have to sell off all they can at heavily discounted prices to cut their losses as much as possible.

Signs for the “Say Goodbye” clearance sale can be seen hanging either side of the foyer in the Tax Centre’s department store.

Locals and tourists make the most of the opportunity to purchase heavily discounted shoes and clothing.

I made my way to the area in the hope of creating a few last images of the building to capture what has been for a long time an instantly recognisable part of downtown Saigon.

The Tax Centre seen above the Metro construction barrier on Le Loi Street.

The downtown area is looking more and more like a ghost town, with two major roads – Le Loi and Nguyen Hue – barricaded off for construction of the Opera House subway station. We often see images of before and after major construction projects and changes to a city’s planning, but rarely to we really focus on the period in-between. I feel happy to be here to experience Ho Chi Minh City in this time of major change – finally I feel inspired to take photos in that part of town, as it never inspired me before! 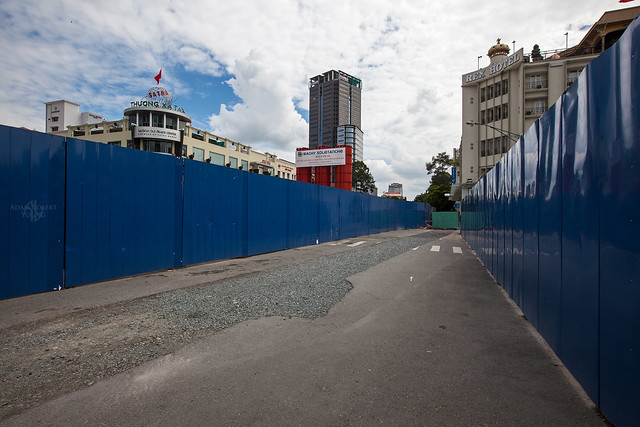 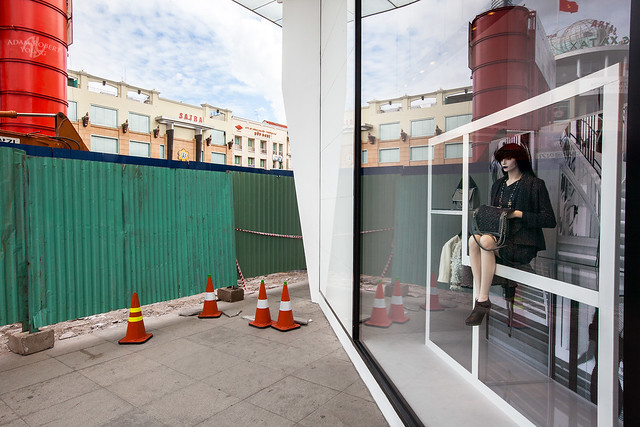 Keep an eye out for my book on Saigon coming soon! No doubt there’ll be images of the Tax Centre at various stages of demolition and a whole bunch of other pictures that show Saigon as it is today.

← So my photo is being viewed all over the world. You’d think I’d be happy! (AKA to watermark or not?) Lydia’s shoot in Saigon →