Home » Documentary » An orphanage in Vietnam – through the eyes of Khuong (age: 7)

An orphanage in Vietnam – through the eyes of Khuong (age: 7)

Posted by adamrobertyoung on 30/09/2014 in Documentary, Topical story | 4 Comments

Allow me to introduce you to Khuong. Born physical challenged (seems to be cerebral palsy), he was left by his parents on the doorstep of Ky Quang II Pagoda at a very early age. Since then, he has been looked after by the orphanage attached to the pagoda. 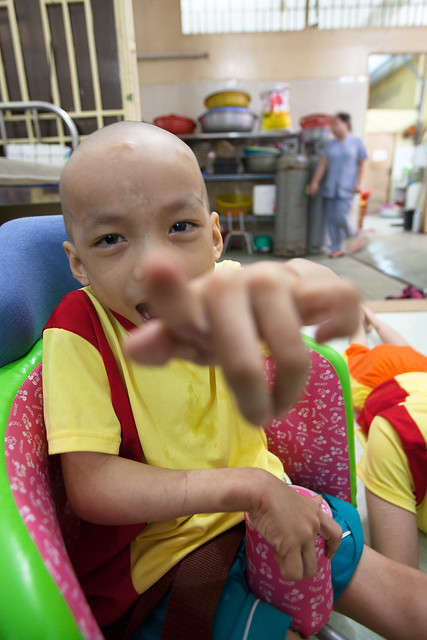 Unfortunately the orphanage is not really equipped to deal with kids like Khuong. It’s divided into two sections – one for the “normal” kids, and one for intellectually challenged kids. Khuong doesn’t really fit into either category, but as he requires more assistance than the other kids, he has been placed in the latter of the two sections. This is a shame, as he is both bright and independent, but has neither ample intellectual stimulation nor access to professionals who can help him learn to control his body more effectively and work to be as able to help himself as possible in spite of his challenges.

Recently I have started visiting Khuong with some friends to help give him more intellectual stimulation and also help as much as we can to give him opportunities to practice both gross and fine motor skills to expand his physical capabilities, or at least not to lose what he has at this point. I’ve only been a few times, but I’ve fallen in love with this kid, as he’s mischievous, smart, and completely determined to do as much for himself as he possibly can.

On my last visit, I had the idea of giving him my camera to use as a way to express himself in a different way. The images to follow are Khuong’s photos. I held the weight of the camera, and Cuong looked through the viewfinder to direct what he wanted to shoot and pressed the shutter himself. He had a great time, and it was interesting seeing what things in his room that he thought were photo worthy. 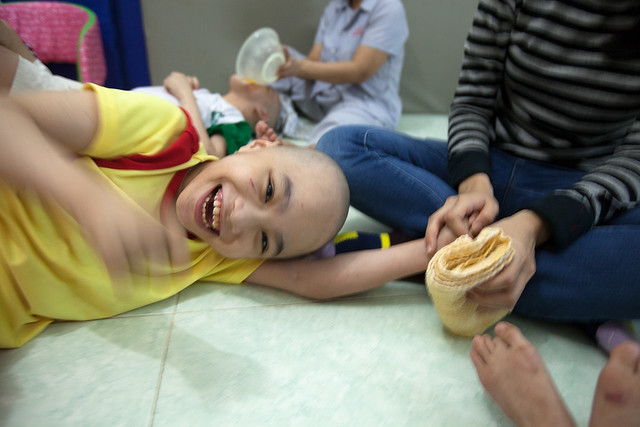 The first thing he wanted to photograph was his roomie who has shared the room in the orphanage for about as long as he’s been there. Their relationship is very close – this is probably as close to family as Khuong has.

After that he decided Chau would be a good subject… 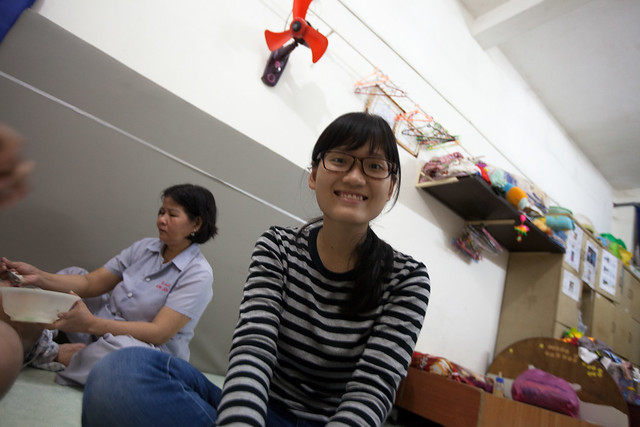 Chau is the girl who I usually visit the orphanage with. The two of us – along with two other friends of mine – make a trip once a week to the orphanage to visit Khuong.

Next was a girl who they also share the small room with? 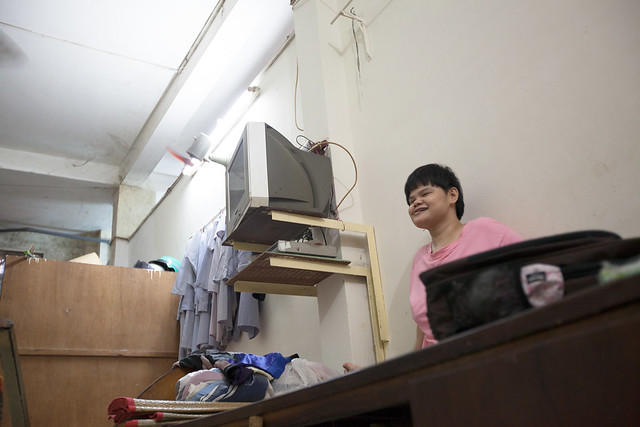 Khuong told Chau it was the TV he had taken the photo of – the girl just happened to be in the shot! After the TV, Khuong thought the next most interesting thing was the fan above him. 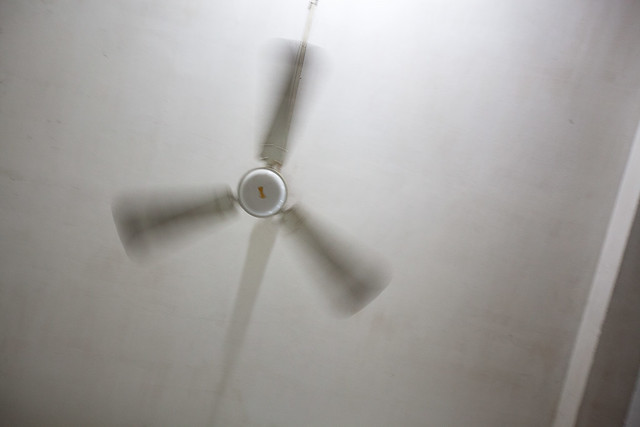 I hadn’t even noticed the fan, but then I realised that Khuong spent a lot of time laid out on the floor looking upward, so he had probably spent hours at a time staring at that thing spinning around.

After that, he photographed the blue cloth that covered the window at the end of the room. 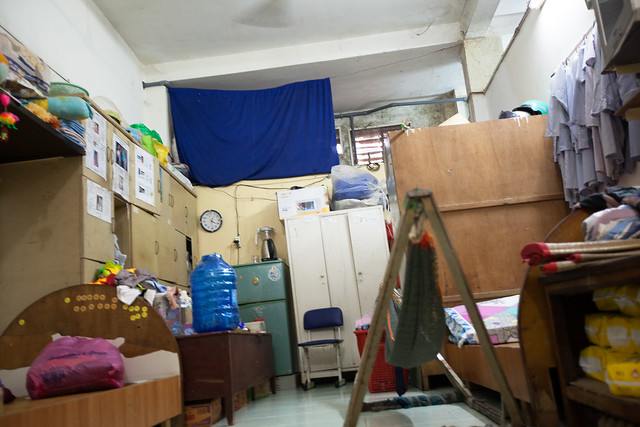 The room accommodates not only about five kids (although a couple are too old to really call kids anymore), but also the lady who cares for them (in the background of the photo of Chau above) and her son, who is a guard at the orphanage and pagoda complex. Obviously the conditions are fairly basic, as there is limited funding to run this orphanage. This is generally the situation across Saigon, and Ky Quang II’s orphanage offers better conditions than many of the others.

I was wondering why Khuong hadn’t tried to take the lady’s photo, but then he decided he’d run out of subjects, so she’d do fine. 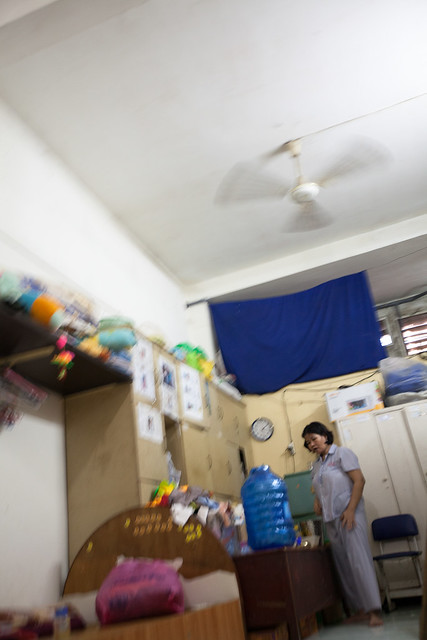 I decided to share the photos Khuong took (plus the one I took of him when I was showing him how the camera worked at the top of this post) not just because I wanted to tell his story, but because I will be leaving Vietnam at the end of November (I’m moving back to Australia), and I hope that this post can help encourage one or two people to take my place on the visits to the orphanage. Khuong is a really great kid who deserves to have some help developing physically and intellectually while he’s stuck in an environment that doesn’t really facilitate it. I intend to start teaching him to read, but I won’t be around long enough to complete that, so people who have experience teaching and at least a basic understanding of Vietnamese would be really great, but honestly, just having visitors is enough to make Khuong’s day and brighten his life a little. We also interact a little with Khuong’s roomies, so it really lifts the atmosphere of the place. Just taking Khuong out of the room to feel the sunlight on his skin or to watch the excavator digging foundations for a new building nearby makes him light up, and with his personality and cheeky smile, it’s impossible not to get hooked!

If you live in Ho Chi Minh City and you’re interested in helping out in some way, feel free to contact me by email: adamrobertyoung@mail.com