Posted by adamrobertyoung on 03/05/2015 in Photojournalism | 7 Comments

Australian media. While I’ve always known the agendas of media moguls play a large part in the news that gets play and that which news goes unreported, but the events of this weekend have really opened my eyes in a new way.

It all started when my wife and I decided to walk into the city from South Bank to grab some food for a very late lunch on Saturday afternoon. I had been shooting the performances put on as part of the Buddha’s Birthday Festival at South Bank, and while there was a food market as part of the festival, we both wanted something a bit more “meaty”. Vegetarian just isn’t our thing!

As we had almost reached Queen Street Mall, we heard the sound of a large crowd shouting. Looking up, I saw a large crowd of what I later found out to be about 3000 people marching along George Street. They were carrying aboriginal flags and shouting slogans such as “always was, always will be aboriginal land”. They turned onto the Queen Street Mall and I followed them (abandoning my poor wife with the agreement that we’d meet up again soon). The crowd filled half of the length of the mall. 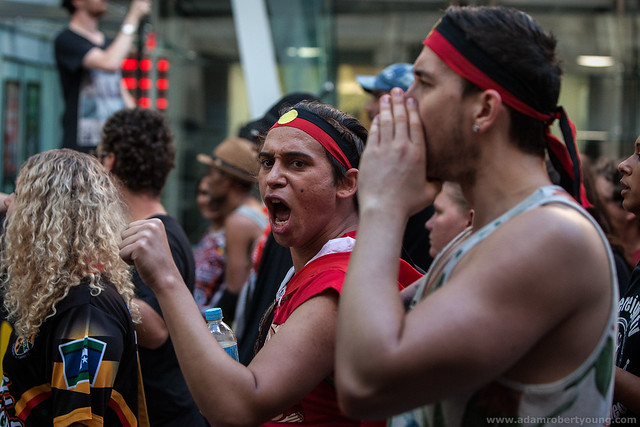 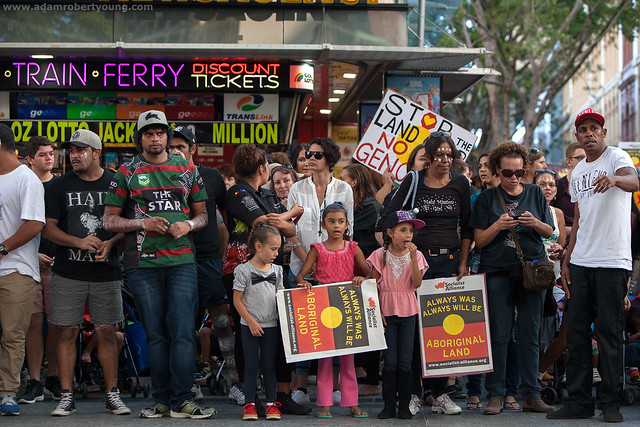 At the centre of the mall just by the Hungry Jacks fast food restaurant, they stopped and leaders took turns stirring up the crowd with a megaphone, played didgeridoo and rhythm sticks, and performed traditional dances. I came to understand that they were protesting the forced closure of about 150 aboriginal communities in Western Australia. 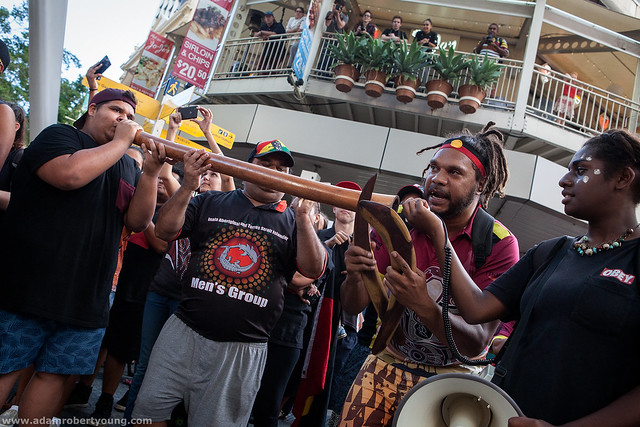 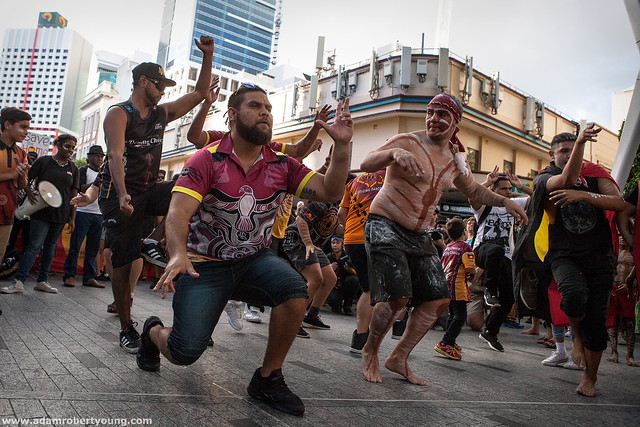 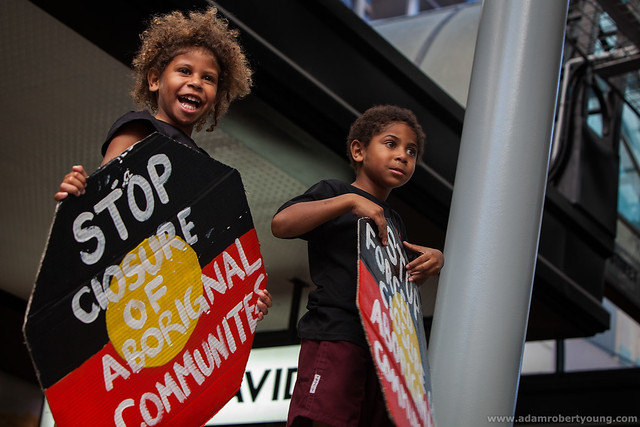 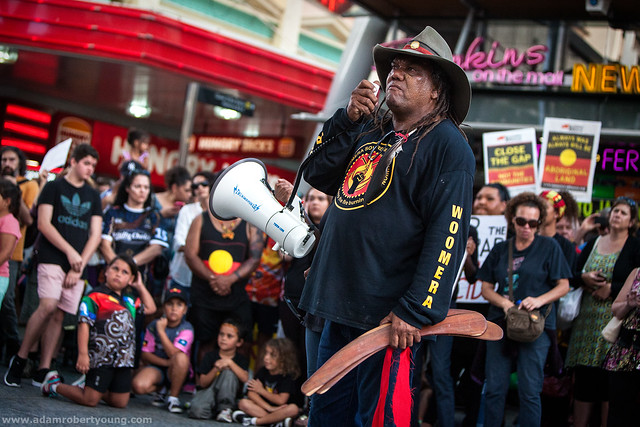 One of the speakers said that the protest wouldn’t be seen in the Courier Mail (Brisbane’s main newspaper) or on the news, so it was up to the people themselves to spread the word to the people around them to raise awareness. I thought coverage would indeed be minimal, but I expected there to at least be a mention of the event in the news. 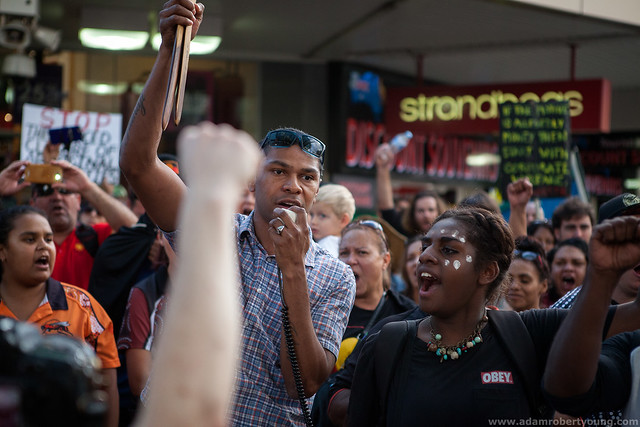 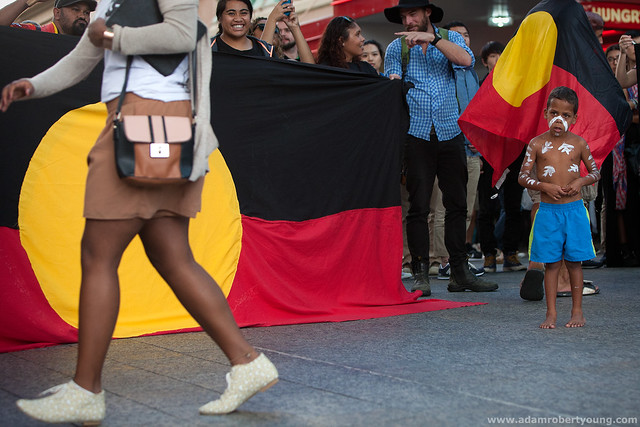 I had to take my leave from the throng temporarily for two main reasons.

1. I had a fiery wife to appease in the Queen’s Plaza foodcourt, and
2. I had filled my memory card during the day, and in the rush to leave in the morning had left my other memory cards on the table halfway between transferring from one backpack to the other. So no matter what, I had to buy another CF card to keep shooting.

After explaining the situation to Jade, who understood but was still frustrated, I ran off to buy a card in one of the camera stores to return and keep shooting.

They were all closed.

So I ran to City Hall, where I knew the protesters were planning to conclude the rally, simultaneously deleting unnecessary shots to free up space on the card.

Sadly, it cost me the best shots of all.

The protesters had stormed city hall, their voices ringing out from the central chamber. By the time I caught up with them, the entrances to the hall had been blocked by police who were letting people out, but not in. 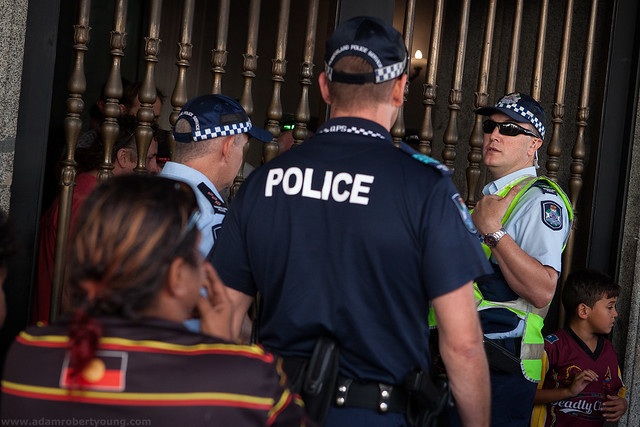 Then and there I vowed to never again miss out on a story due to something as silly as not having enough space on a memory card.

I hung around outside for a while, shooting the occasional protester that emerged from inside the city hall, but I decided to cut my losses and go back to join my wife in the foodcourt before she had to head home alone. 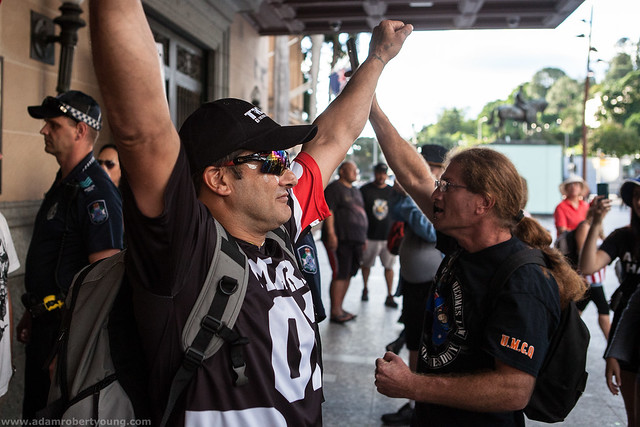 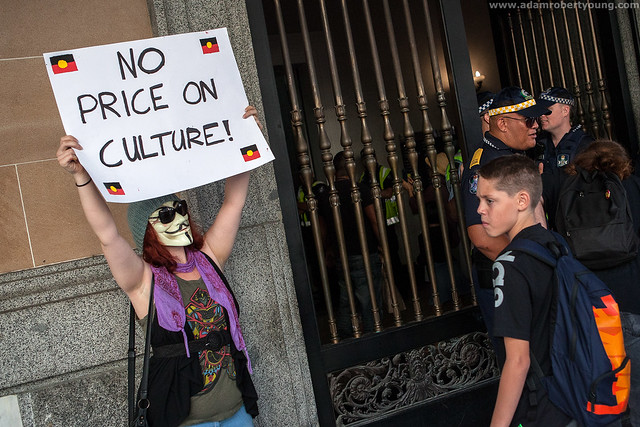 We had our Vietnamese chicken salads and headed home together.

That evening, there was a 15 second mention of the protests in the news (after a couple of minutes that had been dedicated to some baby being born in England), but what really shocked me was that on searching this morning for details of the protests, all the major news outlets in Brisbane and Australia are completely devoid of the slightest mention of the event. While Google suggested there had been relevant news on the sites at some stage, clicking on the links brought me to pages with no sign of such events. It seems while the news had been posted, higher powers had decided it was undesirable and pulled the reports. I dealt with news being censored by government in China and Vietnam, but it seems here, it’s the media outlets themselves deciding what the public should and shouldn’t know about.

They had taken away the whole purpose of the protest – to raise public attention to the events taking place in Western Australia.

*** EDIT ***
Seems I had given the media more credit in terms of speed of reporting than I should have.  The articles are beginning to appear now, about 24 hours after the event:
http://www.theguardian.com/australia-news/2015/may/03/brisbane-protest-over-indigenous-community-closures-occupies-city-hall
*** END OF EDIT ***

I wonder if truly objective news is possible in today’s world. Seems everyone has an agenda. Even my post here has an “angle” (and is not particularly well-researched, to be honest). That’s where the true value in blog sites such as WordPress lies – while there may be some questionable opinions expressed here, at least it gives us the opportunity to be exposed to stories that may not fit in with mainstream media’s agendas.

I’ll be sure to have some spare memory cards handy so that I can be there for the most interesting part of the next unexpected event I stumble onto!