Home » Random thoughts and musings » You will be forgotten, live now!

You will be forgotten, live now!

A trip to South Brisbane cemetery triggered some sombre reflection about the inevitability of our time on this life coming to an end, and all traces of our existence eventually fading without trace.

Yeah, this is not going to be the most cheerful of posts, but stick with me, it will all be OK in the end…

As I wandered among the graves on a gloomy Friday morning, I couldn’t help but feel sad – not about the death of all the necropolis’ residents, but about the way the sands of time had begun the process of eroding away the memory of their existence. We bury people and erect headstones to commemorate their lives with the best of intentions, but over the years, decades, centuries and millenia, those who have memories of those that have passed from this world eventually join them, with just a few words carved into a headstone to tell of their lives. But even the stone memorials eventually decay, erode and topple to the ground, and all human traces eventually return to the ravages of time and nature. 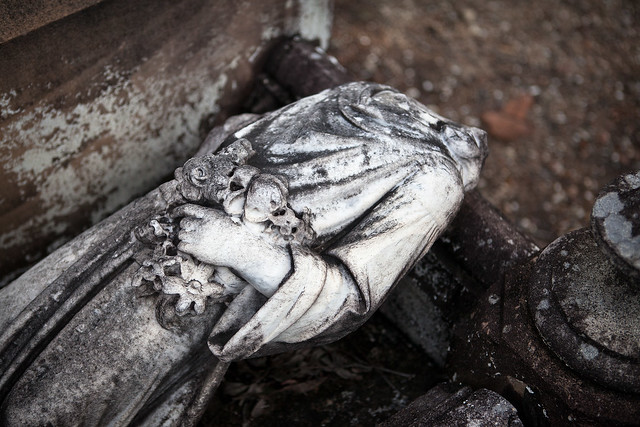 As I walked by the resting places of people who loved and were loved, I saw grave after grave with cracked or fallen headstones, faded messages and many of the graves themselves sinking or cracked by the roots of trees growing beneath and through them. Our attempts to immortalise ourselves or our loved ones are doomed to fail. As much as we the human species shapes and manipulates our environment, in the end, nature will always have the final victory. 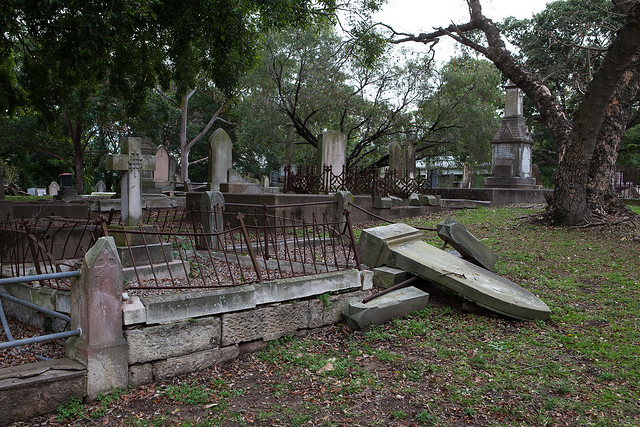 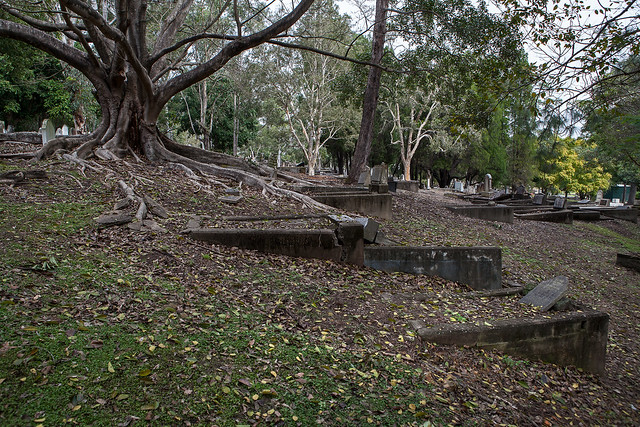 The most beautiful reflection of the impermanence of our lives that I noticed was the artificial flowers placed on many of the graves, many greying as the bright colours fade from ravages of the weather. 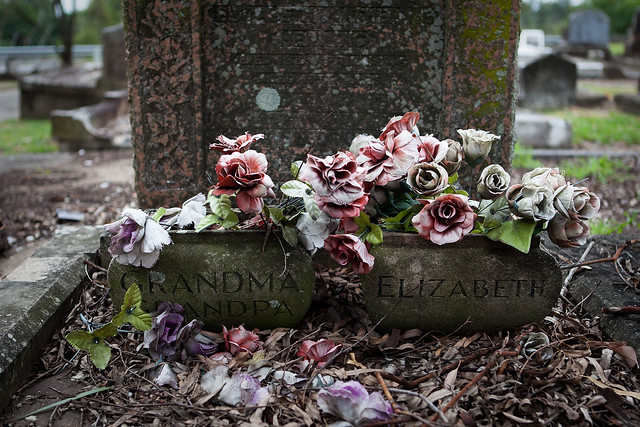 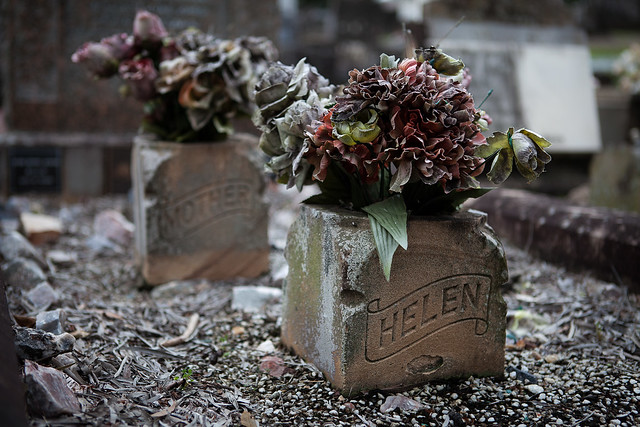 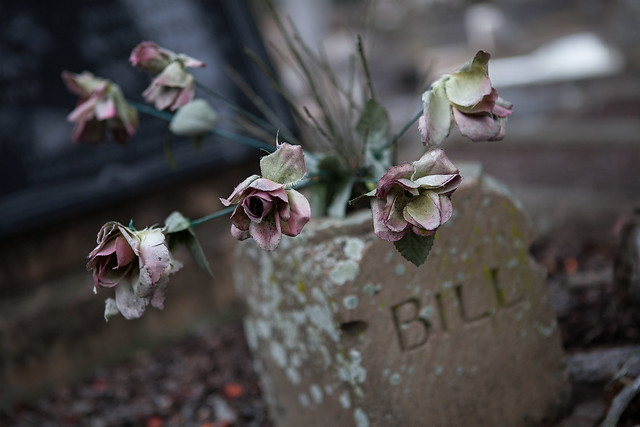 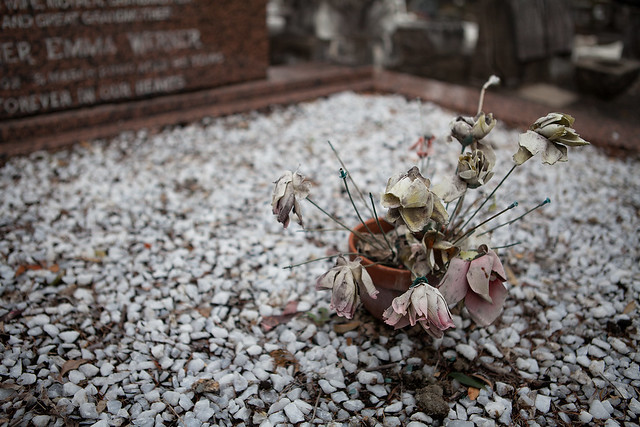 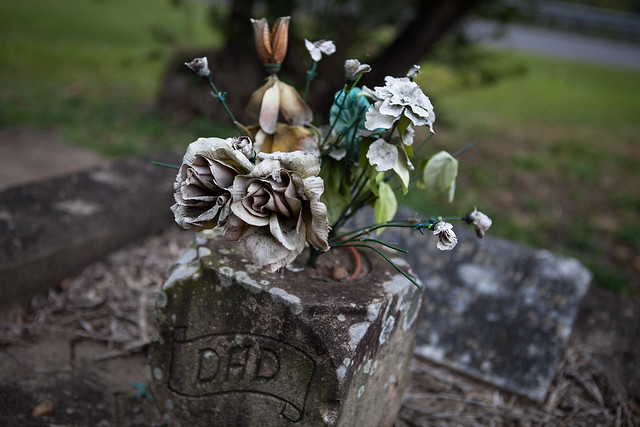 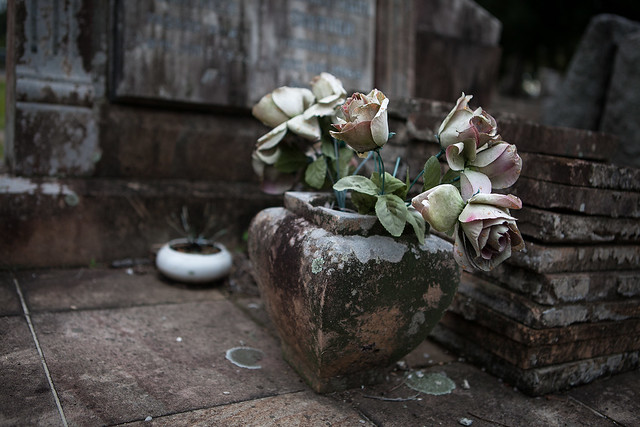 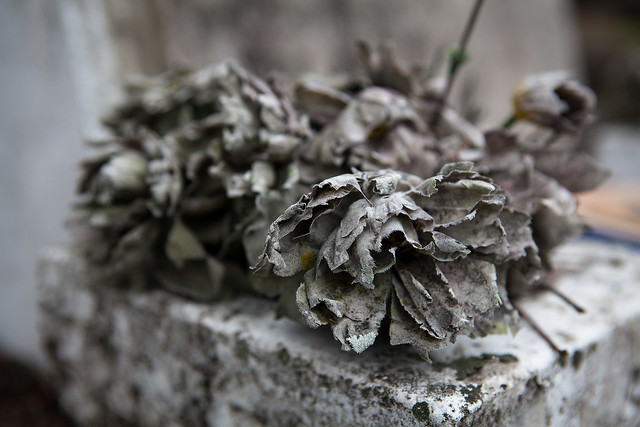 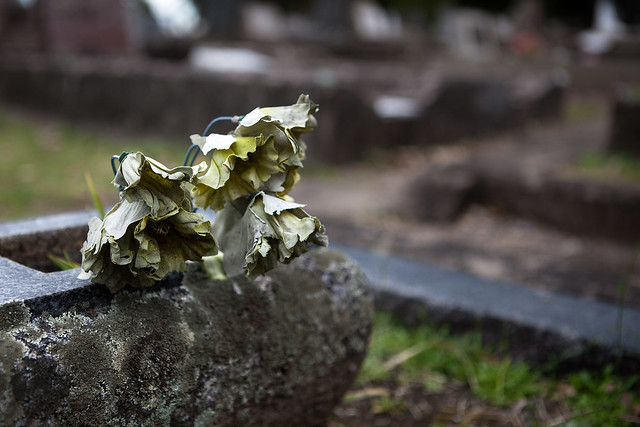 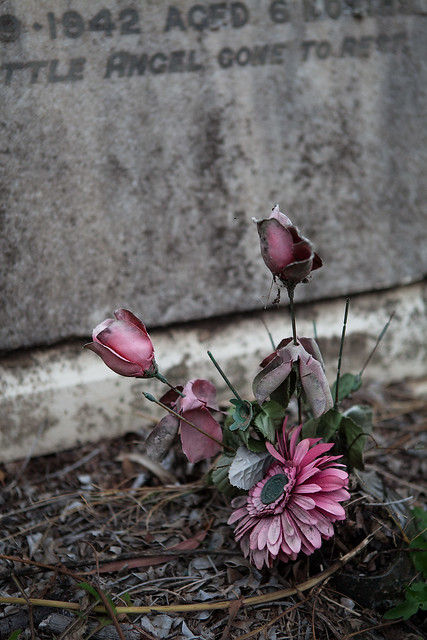 Even ceramic flowers were not immune to decay. 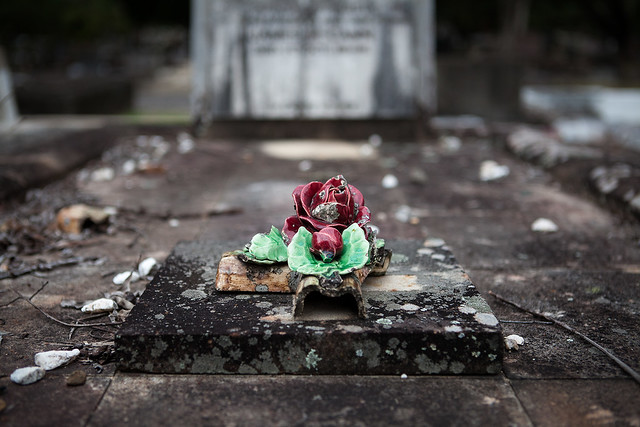 A whole life summed up in a few dates and short phrases, but even they eventually fade from trace. 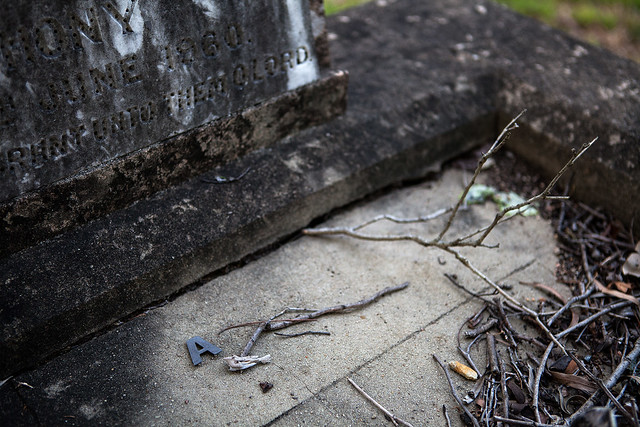 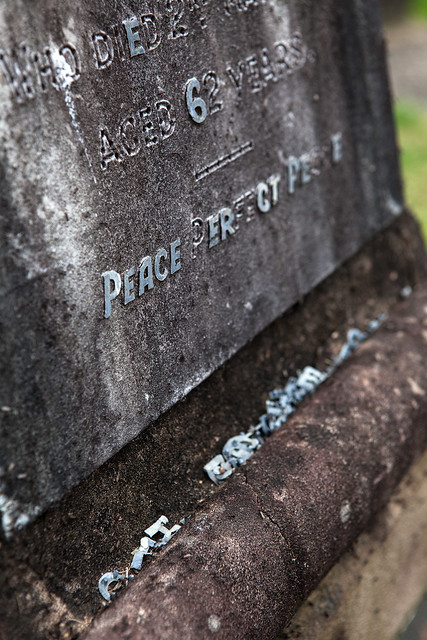 And as the stones wear, they become the home for ants and other insects. 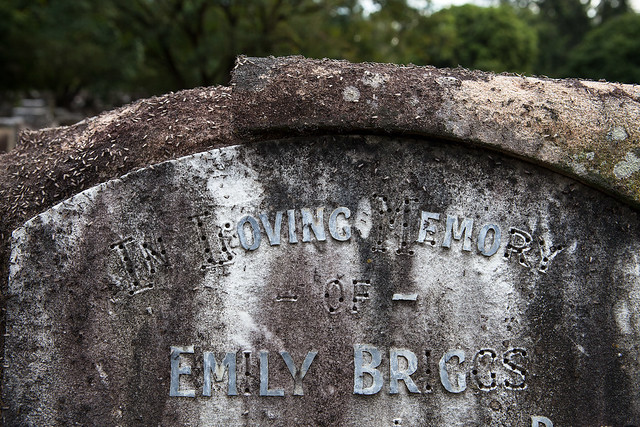 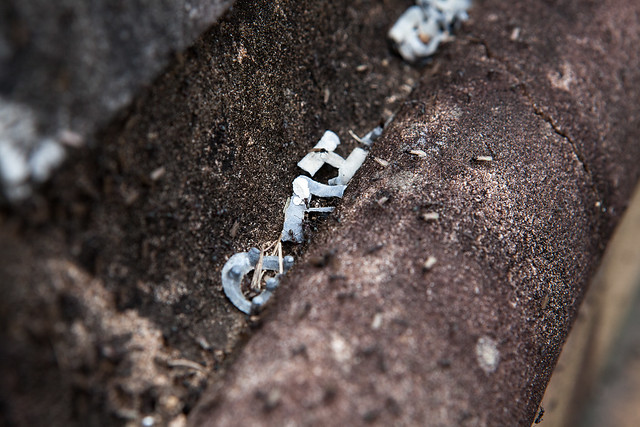 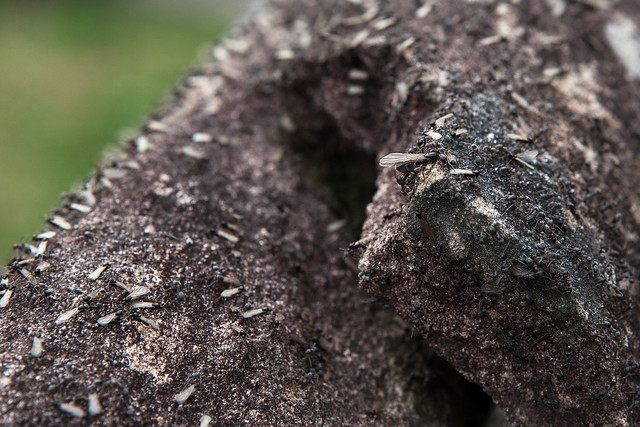 Everywhere I looked, I saw nature dominating humanity. Grass grew over graves, tree roots pushed aside monuments, and spiders built their webs between the headstones. 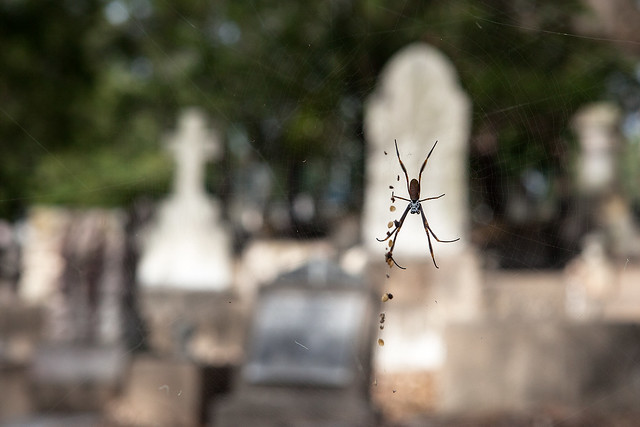 Just as I was watching this one, a flying ant flew into its web and it raced across to inject its toxin into the hapless victim and quickly wrap the corpse. 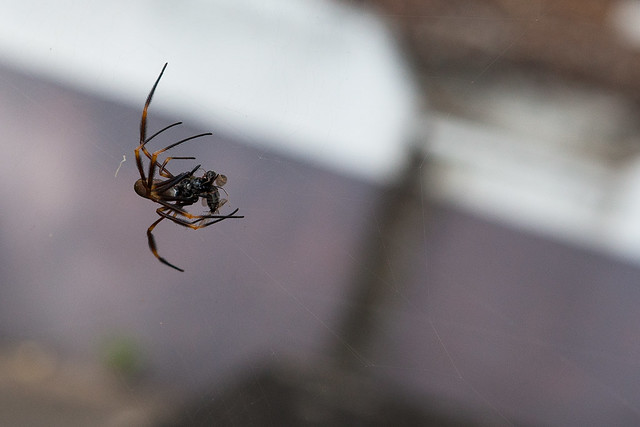 It was now mid-afternoon, and the sun had broken through the clouds. As I thought about all I had seen in the cemetery, I realised just how important it is to make the most of the time we have on this earth. No matter how significant of a mark we make on this world, it is only those that we spend time with while we’re alive who will really know who we are. Only they can laugh at our quirky sense of humour, be touched by our empathy or feel our arm of companionship around them. Sometimes I think about leaving a mark here on earth, but in the quest for achievement, it’s important not to forget to enjoy time with those around us, as it is only those who are with us now who will truly appreciate who we are, no matter how many lines are written about us or how big our headstone once our time has drawn to an end.

In the end, none of that will remain, as much as we like to convince ourselves it will. So live for now, because that is the one thing that’s certain! 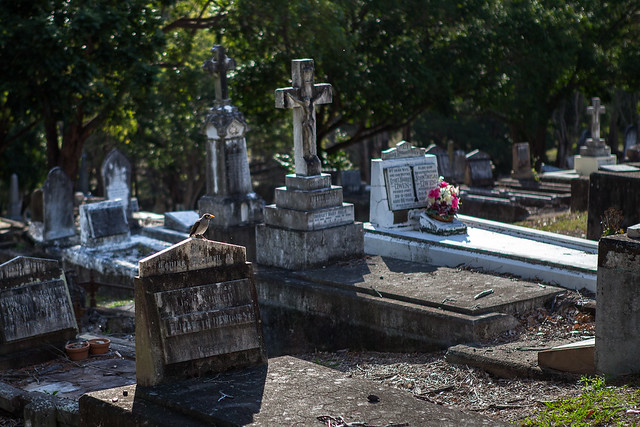