I know I’ve been quite inactive online over the last year or so.  It’s been a crazy year!

A large chunk of it involved me in hospital learning to walk again after an intense medical incident.  I won’t bore you with the full details, but basically I was hit by an illness called Guillain-Barre Syndrome.  It’s an auto-immune disease where the immune system attacks the myelin around the nerve cells.  My variant (called Bickerstaff Brainstem Encephalitis) had me in a coma for about five days, and they didn’t know if I’d pull through.  But I’m too stubborn for that, so I fought my way back and once I got out of the ICU, I spent a couple of months in the rehabilitation ward regaining the function of my lower body.

Obviously this brought my photography to a grinding halt, and the only images I got for a few months were ones like this: 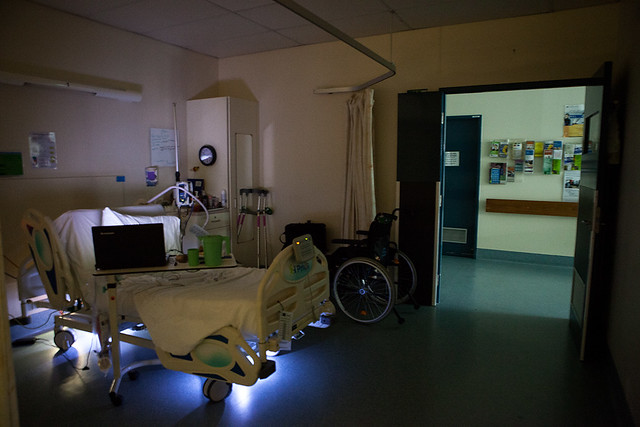 My bed in and wheelchair in the rehab ward. This was my room from May to July, 2016.

Thankfully, by that time, I had already had quite a productive year.  I made a trip to Cambodia in January, where I worked with a range of government and non-government organisations on a variety of projects.  It gave me the chance to see into a wide range of aspects of life in Cambodia – from the quirky to the intense.  In this first post, I will share some images from that time.

The first organisation I worked with was called Riverkids.  They help families where children are at risk of falling victim to human traffickers by ensuring conditions that place the families at risk are improved.  This includes helping them generate a stable income, and helping their children get an education. 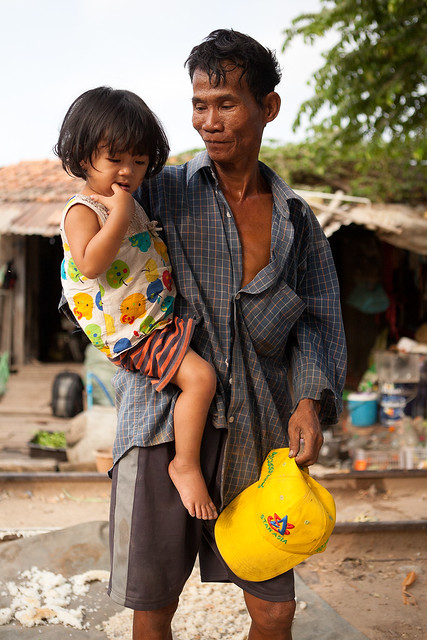 This man lost his right hand in an industrial accident and now makes his living collecting rubbish to sell to recyclers. It’s challenging to support a large family on such a meagre income. 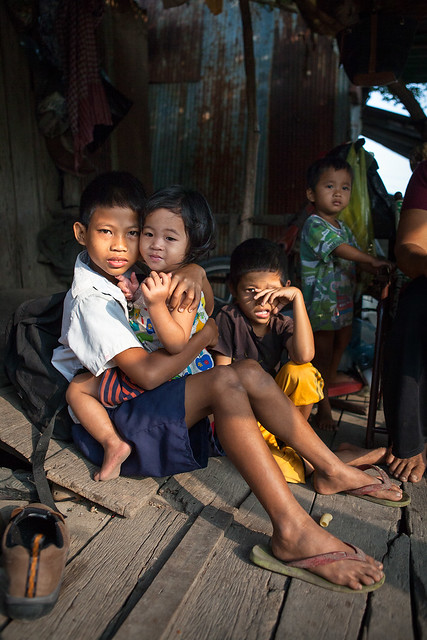 Unfortunately, those living in poverty tend to keep having children. Kids raised in these conditions are at high risk of being victims of child trafficking in many developing countries. 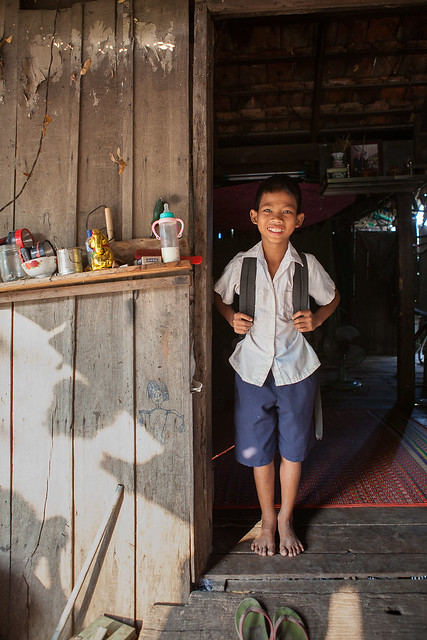 Education is one of the keys to breaking the cycle. 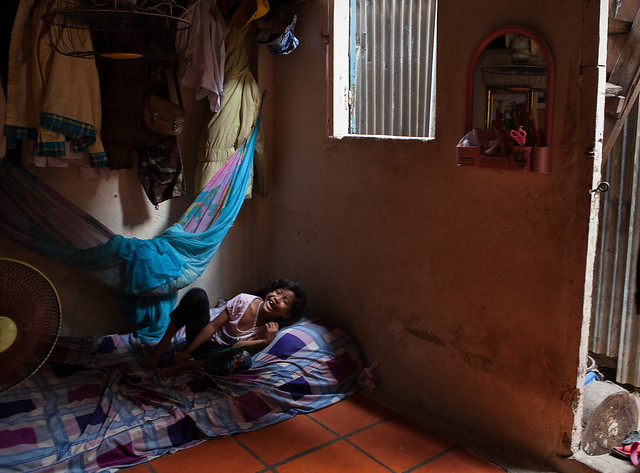 This girl’s parents have to lock her and her siblings in this room that the family lives in during the day, as they both have to work and cannot afford a carer, and they worry as the cluster of improvised housing they live in shelters a wide range of characters including drug dealers and those with connections to child traffickers. 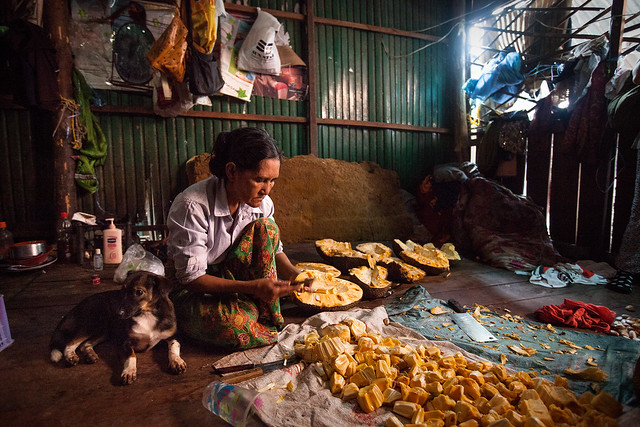 A woman prepares jackfruit for sale at the local market in the room she shares with her husband, daughter and son in law, and her young grandchild. All members of the family work, but barely make enough to meet their most basic needs.

It was a heavy story to cover, so for a bit of light relief, I spent time looking into the tarantula trade, and visited Romdeng restaurant in Phnom Penh where they serve deep fried spiders along with other unusual delicacies such as red fire ants. 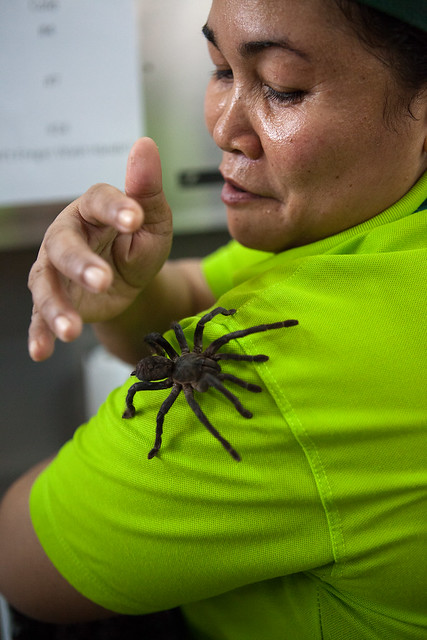 One of the kitchen workers at Romdeng plays with a defanged tarantula before it joins its friends in the deep-fryer. 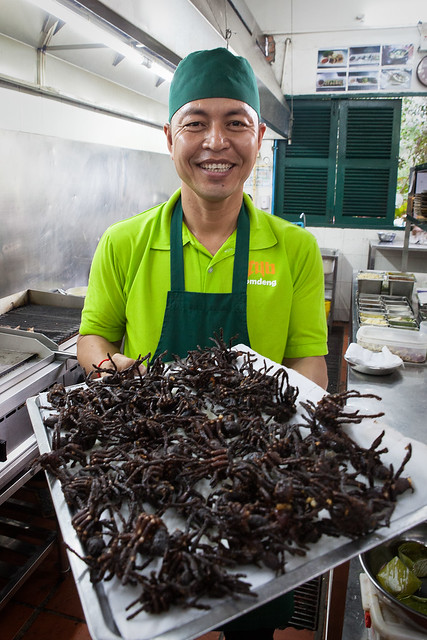 Another story I was excited to explore was the lives of Phnom Penh’s sex workers. The grassroots NGO WNU (Women’s Network for Unity) advocates for the rights of women involved in the sex industry, and fellow photojournalist Ruth Goodwin and I spent a few days with three such women – Dara, Win and Socheata. 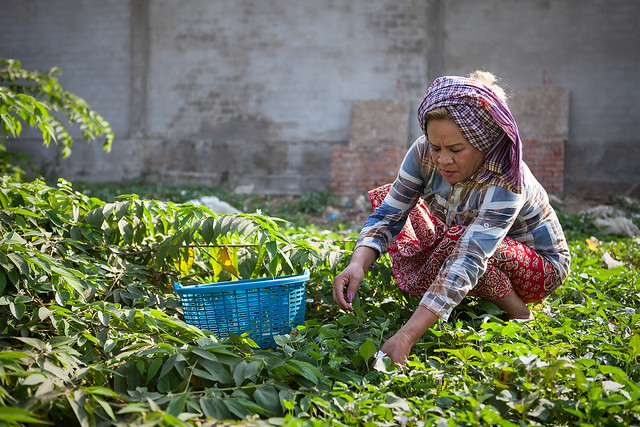 Dara is a transgender sex worker. She recalls being persecuted even as a child during the Khmer Rouge regime, as she was already different from the other boys. During the day, she harvests morning glory plants that grow wild behind her home to sell at the local market, but her main source of income is from her evening work. 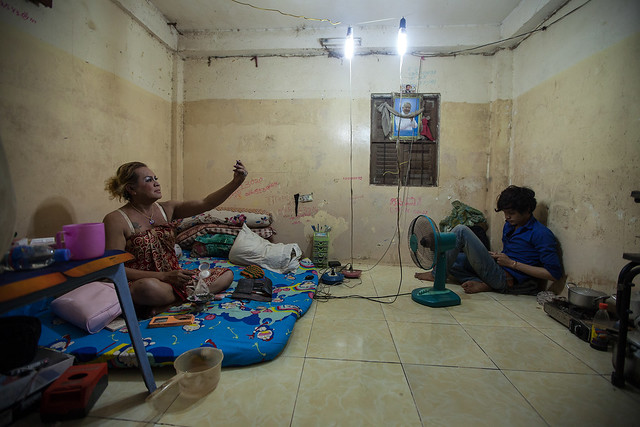 Dara prepares for the evening’s work as her unemployed husband sits playing war games on his mobile phone. There was definitely a story behind why he couldn’t work, but in the short time we had with them, they did not feel ready to reveal such details (although Dara was very open about her own story). 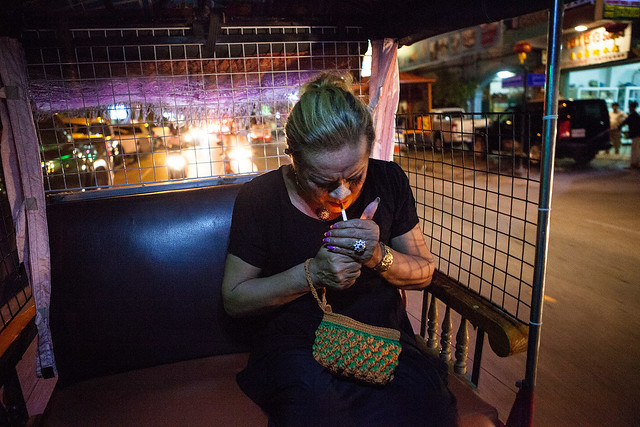 Dara lights up a cigarette in the back of a tuk tuk on the way to one of the locations she tries to secure clients. 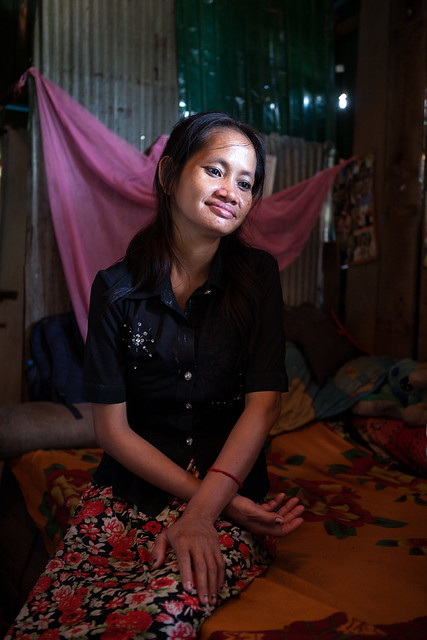 Socheata was a sweet lady who had experienced terrible things at the hands of clients. A friend of hers had been killed when a client slit her throat. When we visited, Socheata had just started learning to read and write in the hope that it would allow her to find an alternate form of employment. 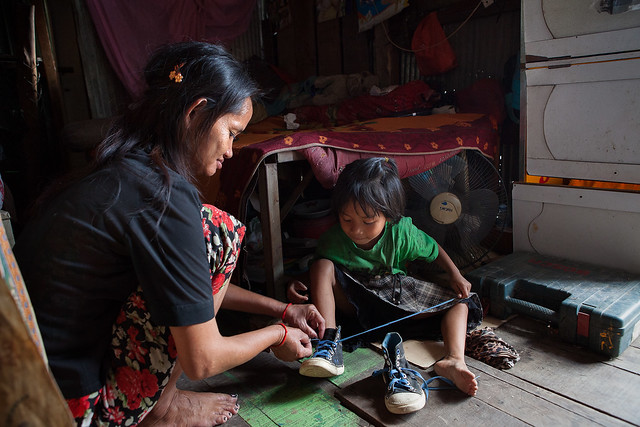 Socheata helps her adopted daughter tie her shoelaces in the room they share with Socheata’s husband and children. Socheata took on care of the girl when a friend who left the child in her care disappeared without warning. 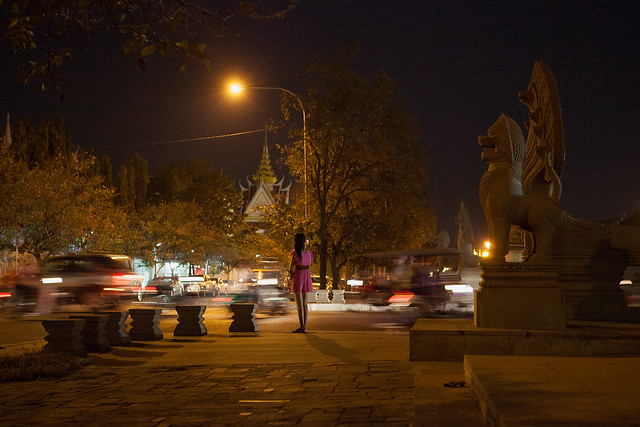 Socheata waits for a client by the road near Wat Phnom.

After such a heavy few days, it was relieving to spend some time exploring the growing street art scene in Phnom Penh. 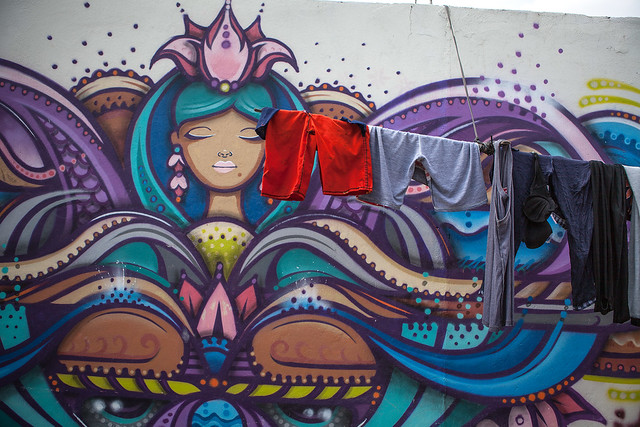 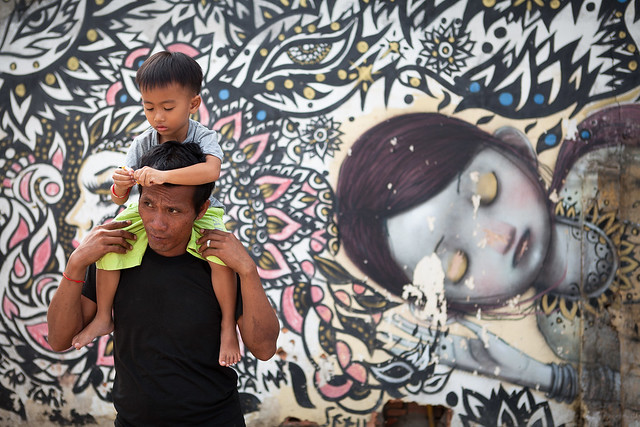 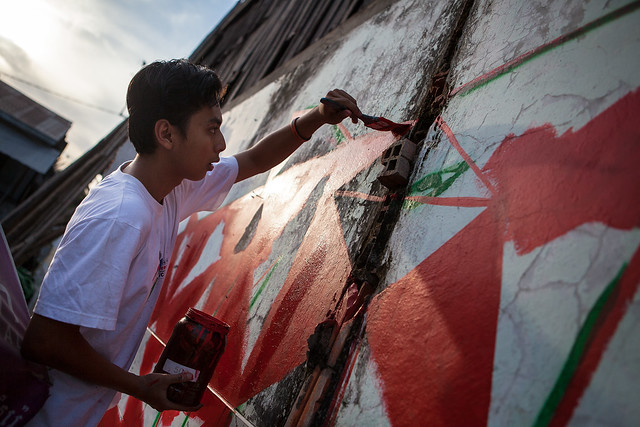 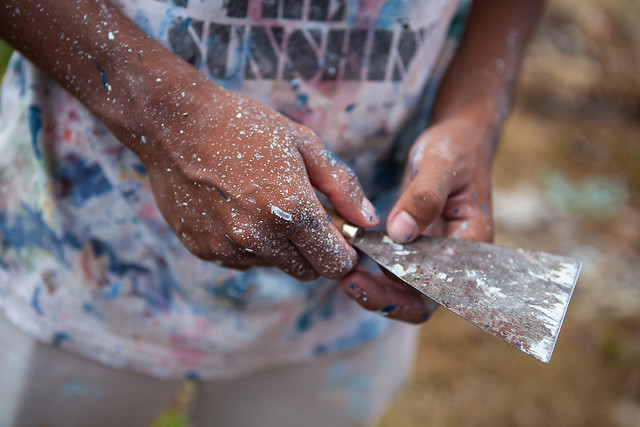 The paint-splattered hands of “Koy”, another local street artist. 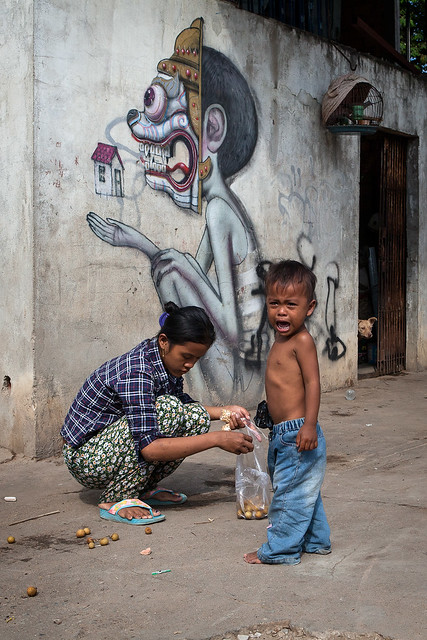 One of my favourite images of 2016 – a mother picks up dropped longans in front of a painting by French street artist Seth. There’s so many ways that the scene playing out reflects elements of the painting – I couldn’t have designed it better than what naturally played out! 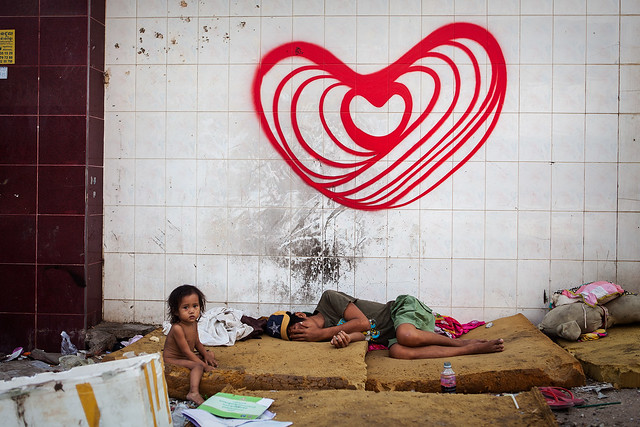 Unfortunately, no matter the story, the poverty that is rife in Cambodia could not be denied.

The time spent in Phnom Penh left me with a strong sense of how Cambodia is very much still trying to recover from the effects of the Khmer Rouge regime, but that there was hope of better days ahead. 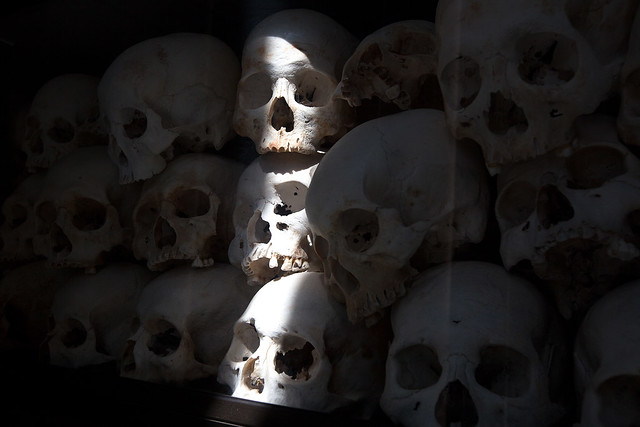 Skulls collected from the killing fields just outside Phnom Penh

I was soon to see even more significant effects from the kingdom’s dark days, and be inspired by people working to turn it around. Coming up next: Siem Reap.