Home » Behind the scenes » Anti-Japanese protests in Guangzhou

Posted by adamrobertyoung on 17/09/2012 in Behind the scenes, Photojournalism | 2 Comments

I’m not gonna get into the background, as most people will have heard something about the protests in China over the Senkaku/Diao Yu Islands (their name depends on if you ask a Japanese or Chinese person), and if you haven’t, you can always do a quick Google to find out.

What I AM going to do is to share of what I saw of the protests last night. I was on my way with my girl to one of our favourite restaurants – and Irish Pub called the Paddyfield – which is near the landmark Garden Hotel in Guangzhou. They do a great Sunday roast set meal for a pretty good price, including a purely evil chocolate mousse…

Anyway, I’m off on a tangent again… what was I talking about…? Oh yeah, the protests…

As we got close, the bus could not continue along the road, as it had been barricaded off by police. I had heard there had been protests around the city but was unable to check them out due to work (sadly I have to fund my photography by teaching, I hope one day it can become a self-funding activity). So we decided to get as close as we could.

We walked down the 8-lane Huanshi Dong Road, which is normally bumper to bumper in the early evening. It was quite surreal walking along this road without fear of being hit by a speeding car or bus (this is China, it would be no surprise to be collected by a taxi even on the footpath, let alone a main arterial motorway)!

Many locals weren’t caught up in the anti-Japanese sentiment, they just thought it was cool that something interesting was happening in town for once, and found the closed road more fascinating than the protests themselves

As we got closer to the Garden Hotel, the chanting of the protesters got louder. The police presence intensified.

Now, I’d seen mobs of law-enforcement personnel in China before, but this time there was something different about them. Instead of the usual excessive aggression and strict control, they seemed almost apathetic. This was certainly new for me! Most of them were sitting around eating take-out food, chatting or texting. People wandered in and out of cordonned off areas without them batting an eyelid. This was really one for the books!

Had this been a protest about anything else, even the sight of a camera (especially in the hands of a foreigner) would send the police scrambling to get me out of there! But somehow it seemed they were quite happy for as many people to be spreading word of the events as possible. There are rumours about the protests being orchestrated by the government, but I do believe they were just taking advantage of what the excessive nationalism of many Chinese made inevitable, rather than actually initiating things themselves

At this point I’d stepped over the police barrier and wandered into the supposedly restricted area. Most of the cops ignored my presence completely. I was manhandled by one particular officer, who seemed the type who joined the force ’cause he got high on the feeling of pushing others around, but his colleagues were calm, relaxed and friendly, and asked me to move back to the non-restricted area just to get the guy off my case more than anything else (at least it seemed that way)

It became quickly apparent that they had been given orders to let the protesters have free reign as long as they did not bring harm to individuals or property, although that was not entirely successful as there was still some damage done to private property, with reports of Japanese-made cars being damaged or even overturned and even a rumour that the mooncakes in the Garden Hotel were looted by protesters! Hmmm, I didn’t know mooncakes were Japanese! In any case, it was clear most officers were on the side of the protesters, and seemed to be guiding them along the way, clearing traffic for them, rather than actually trying to suppress anything. It’s amazing how freedom of speech in China suddenly becomes a reality when the government supports what you want to express, even if it’s poorly-informed, fanatical nationalistic racist zealotry that really reflects poorly on the nation as a whole!

This was about the only “damage” I spotted, but I didn’t really take the time to move to the epicentre of activity. My wife was hungry, and trust me, I’d rather face a thousand of the protesters whilst wearing a pro-Japanese T-shirt than make my wife wait another half an hour before eating, and she didn’t know the way to the restaurant! 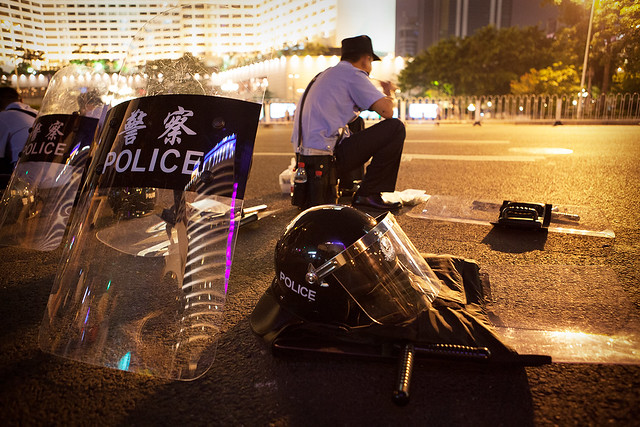 I must have seen at least five-hundred police officers equipped with riot gear, but the gear was more for show than anything, and the majority sit idle, at least while I was there. The Garden Hotel is the large building in the background. 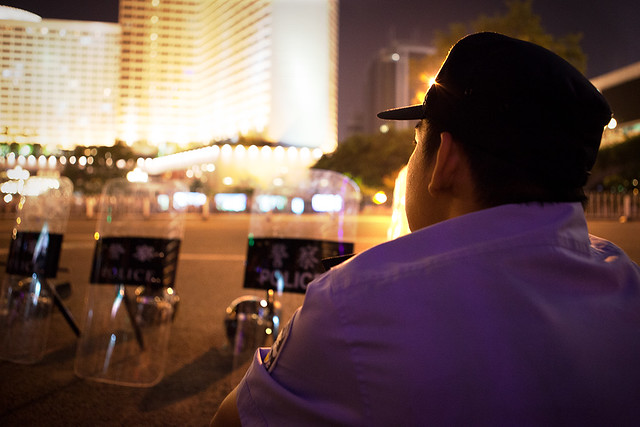 Honestly I do feel for the many officers who were probably called in on their day off, or for overtime to go and waste their time sitting around for hours on end.

Anyway, the reason the Garden Hotel was a centre of activity that evening was because the Japanese consulate in Guangzhou is located in the office block of the hotel.

By the time we arrived, protesters seemed to be tiring and the whole thing was losing momentum quickly. There were still many locals snapping and filming away on their iPhones, but it was obviously the tail end of the protest, and the group of protesters had shrunk down to just a handful of zealots.

I think the majority of people were not actively supporting the protests, which gave me a sense of hope for the population as a whole. It was more about the Chinese tradition of “Kan Re Nao” (literally “watch noisy and hot”), that is a fascination with anything that draws a crowd, simply because it managed to draw one, rather than the nature of the event itself.

The sign says “The Diao Yu Islands are (our) China’s”. On the back said something that could be translated to the effect of “Japan piss off out of China” (日本滚出中国)

This is more or less the group by 8:23. There were others following just to see if they’d do something interesting, but most people had lost interest and were heading home. I thought about going down to take some shots of the protesters, but a hungry wife and the lack of drama led me to decide against it.

I’m still mad that I never managed to get any shots of the protesters themselves when the momentum was still up, but there are hundreds of such photos online already. What most people outside China don’t get to see is what really went on around the protests, and how other locals reacted. I hope I’ve managed to give you bit of a glimpse into what nobody else thought interesting enough to shoot.

← It’s all about the face! Anti-Japanese Protests – In the Thick of it →